Suddenly the inmates break into singing. A prison guard tries to bark them to silence -

I have seen "bark" used with people to describe that someone yells angrily, but how common is it? Would it seem odd to you to use "bark" here?

"QUIET!" barked the prison guard, trying to force the inmates into silence.

Sirius barked a laugh, earning a surprised glanced from the two younger men. (Example sentence from Oxford's definition of bark)

...although the leaders of their party in this country ... will be obliged nevertheless to change their plan...from the effervescence which is appearing in all quarters and the desertion of their followers which must frown them into silence. (The Works of Alexander Hamilton)

I included that sentence here just to show that you might find constructions that seem to match "bark them into silence" but they are probably very old-fashioned or not saying exactly the same thing as "x barks y into silence".

Here are the most common words in the modern English corpus that occur before "them into silence" according to Google's NGram viewer. 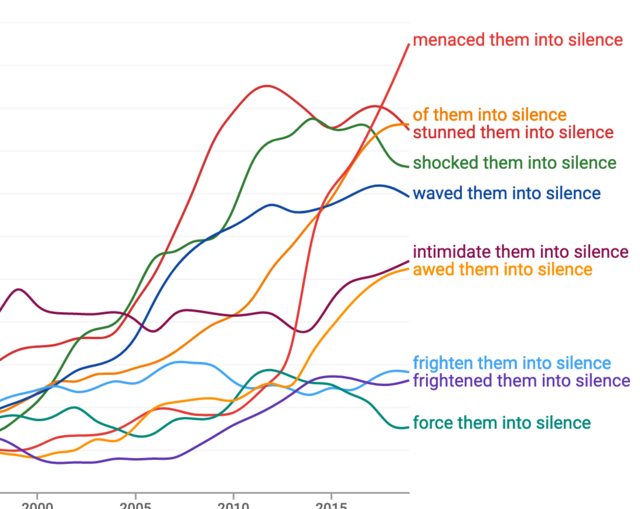 The "of them into silence" in that list is usually "most of them", "both of them" or something similar.

This seems totally normal to me - the guard is a person in a position of authority, giving an order, and as such the simile "bark" is probably going to be the most commonly used one, though more frequently used about soldiers.

The comparison, of course is with a dog barking - loud and harsh.

I would make one slight adjustment though: "A prison guard tries to bark them INTO silence."

Not the answer you're looking for? Browse other questions tagged word-usage word-choice or ask your own question.

12
Clash, crash and crush
4
How to choose from 'There is no chair / There isn't a chair / There are no chairs / There aren't any chairs'?
2
How common is the use of the noun "run" as a place for domestic animals?
1
A usage of the word "by"
1
<Disobedient>, <Defiant>, <Rebellious> or <Insubordinate> child/youngster
0
Someone who never gets tired
2
Is a rockbreaker a vehicle?