What do you call something that looks like clockwork? 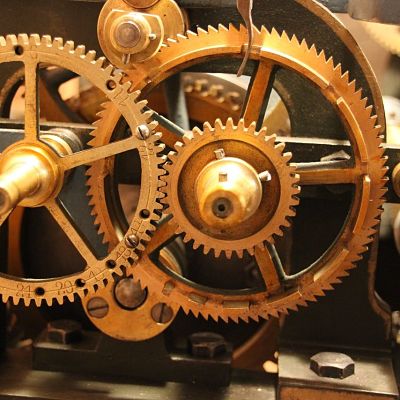 I don't know any adjective or word that has that particular meaning. What's the closest expression or word if there's no adjective for it?

Which aspect of it do you want to capture?

The actual shape and structure? There's no one word that does the job better than the phrase "resembling clockwork", postfixed to the noun.

Inside was a complex set of gears resembling clockwork.

Its other qualities I would describe as mechanical, intricate, ingenious, interlocking/fitting, elaborate, finely engineered, toothed, or (depending on what you're describing) gearlike.

Just "Clockwork"! This isn't a common thing to say, but:

Clockwork refers to the inner workings of either mechanical machines called clocks and watches (where it is also called the movement) or other mechanisms that work similarly, using a series of gears driven by a spring or weight.

Alternatively you could use "gears" or a "gearbox".