Is "mistakes are caused because of…" redundant?

In this B2 exercise the student had to complete the second sentence so that it had a similar meaning to the first sentence, using the word given in block capital letters. The student must not change the word given and they can only use between two and five words in the space.

A student of mine wrote

“Sometimes mistakes ARE CAUSED BECAUSE OF the tiredness of the machine operators.”

The textbook, published by Cambridge, says the following are the correct solutions

36 are made OR occur/happen | because of

I understand that Cambridge solutions work better, but I'm not sure why my student's solution is wrong. Is caused and because in the same sentence redundant? And yet, the Internet has many many examples of sentences containing the string: “caused because (of)”

I suggested that the following worked better without "because" and that the preposition by was necessary.

Sometimes mistakes ARE CAUSED BY the tiredness of the machine operators.

However, can someone please explain why the student's solution was inappropriate.

Most people won't mark someone as a non-native speaker if they wrote "caused because of"—it's something that is pretty commonly heard when people are speaking and composing their thoughts as they talk. It's not well-written English though.

"Caused" is defined as "to make something happen". "Because of" is defined as "as a result of". So, if I say "Heart attacks are caused because of blood clots." I'm literally saying "Heart attacks are made to happen as a result of blood clots." That isn't really what I'm trying to communicate, even though most people will infer what I mean from the context.

When you say "caused because of", you're trying to use the "happen" part of "caused" without the "made to" part or make "because of" mean "by" instead of "as a result of". You should just write "happened because of" or "was caused by".

The results for * because of are also interesting. The top results for the word immediately prior to "because of" seem to show that "because of" is most often used either on its own, or with 'is' or 'was': 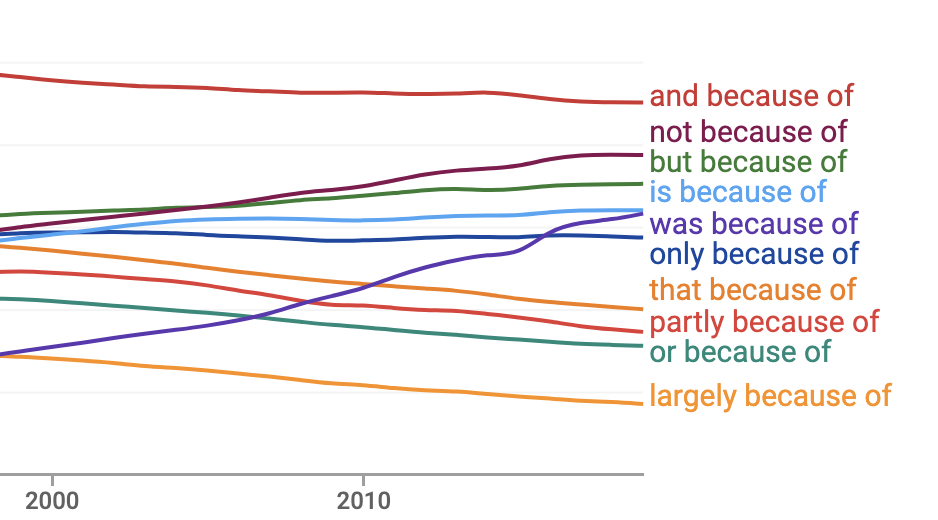 The impression given by "are caused because of" to me is that of a typical 15 year old writer (native speaker), who is trying hard but ultimately is producing a rather wordy expression.

The repetition "caused because of" seems typical of student essays.

Nevertheless, as your research shows, it may be poor style, but is quite common. This is a good case for giving constructive feedback, and not just marking "correct" or "wrong".

This is correct but wordy. A better answer would be "are made because of"

But in everyday language such redundancies are quite common ("I don't know nothing") and typically interpreted in a pragmatic way, by applying context and common sense. It is still, as others remarked, bad style.

Sometimes we cannot see the wood for the trees. The long question has sprouted a forest in this case.

Sometimes mistakes ARE CAUSED BECAUSE OF the tiredness of the machine operators.”

Now with Because of already inserted as a given. Let us do some simple substitution

Sometimes mistakes ARE "make something happen" BECAUSE OF the tiredness of the machine operators.”

We can then see that this makes no sense

If we used the noun Cause then it would read

Sometimes mistakes ARE "reason" BECAUSE OF the tiredness of the machine operators.”

We can then see that this also makes no sense

We do not need to make something happen, we have already implied that something is going on we just need to finish the phrase "Sometimes mistakes ...." which could be happen/occur or are made.

Not the answer you're looking for? Browse other questions tagged prepositions passive-voice .

9
Redundant prepositions?
4
How to say that you are a teacher because of your education?
1
Is there any semantic difference between due/due to and because/because of?
1
Stand Out For/Because Of
1
Doubts on finding grammatical mistakes
2
What kind of words are "given", "considering" vs "even though" and "because"?
0
Through or because of
0
Is "in" redundant in the phrase "in during"?