He was not supposed to do that.

'Supposed' is a Participial Adjective then how 'to do that' Infinitive clause is working here. It doesn't look like a catenative structure too.

And how is 'supposed' a Participial Adjective not a passive structure of simple past Tense?

He was not supposed to do that.

Q 1. 'Supposed' is a Participial Adjective then how 'to do that' Infinitive clause is working here. It doesn't look like a catenative structure too.

Q 2. And how is 'supposed' a Participial Adjective not a passive structure of simple past Tense?

A 1. I think you will find you are splitting the words in the wrong way.

In this case the adjective "supposed to" is used to indicate what something is likely or intended to do.Grammarly

Supposed to is part of a modal verb phrase. "To be supposed to do something implies" that the subject is obligated and expected to do the main verb’s action, although there is a possibility it won’t happen. To be supposed to is a common phrase that functions the same way a modal verb does. Modal verbs, also called auxiliary or helping verbs, add meaning to the main verb in a sentence by expressing possibility, ability, permission, or obligation. Supposed to, like have to, can fall into the “obligation” category.

It can also be used to indicate what a person (or thing) is likely to do or is reputed to do. Whenever it is used in either of these senses, supposed to will be preceded by a form of to be and followed by a verb.

"That was a really stupid thing to do"

Note In this case "that" is used as a pronoun.

And how is 'supposed' a Participial Adjective not a passive structure of simple past Tense?

A 2. It is Past tense. He did something in the past and "that" is the result and we are talking about "that" in the present. However 'be supposed to' the modal verb phrase can be used in past present and future tenses.

Present / Future - We are supposed to meet them here.

PAST - We were supposed to meet here.

The confusion over using multiple verb tenses in one sentence probably arises because we have heard that we need to maintain verb tense consistency. These two things are different.

supposed adjective (INTENDED); be supposed to; to be intended to: Ref CED

These batteries are supposed to last for a year.

do; verb; did | done: do verb (PERFORM) to perform, take part in, or achieve something: Ref CED

He was not [supposed to do that].

The important thing here is that "supposed" is not a verb but an adjective with the infinitival clause "to do that" as its complement. The whole AdjP "supposed to do that" is then predicative complement of "was".

The fact that "supposed" is not a verb rules out a passive interpretation, as well as this being a catenative construction.

Below is a simplified tree diagram. 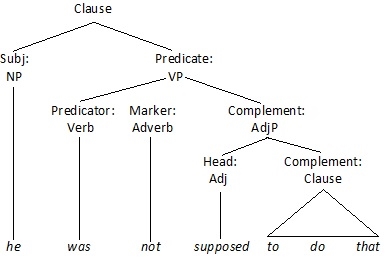 Not the answer you're looking for? Browse other questions tagged sentence-construction tense or ask your own question.