Is "100% correct pronunciation" an understandable, correct, and proper English expression?

If I put "100% correct pronunciation" in the following sentence, is it understandable and correct? "100%" is what I would like to emphasize. If it is not right, how should it be expressed?

"It is the 100% correct pronunciation of mischievous you just heard in the video."

PS. I looked it up in the Google Ngram Viewer. But, it turned out nothing.

Some English speakers feel that '100 per cent' is overused as an expression, especially in connection with things that cannot be measured. For example, you couldn't say a pronunciation was '87% correct' - how could that even be measured? But in colloquial speech, '100%' is often used to mean 'completely', and '99%' (or sometimes '99.99%') to mean 'almost'.

Your example sentence is okay. It captures everyday speech quite well. Although it might be less open to criticism if it was phrased like this:

The pronunciation of 'mischievous' you just heard in the video is 100% correct.

Yes. Almost all English natives would understand your intended meaning.

I'd say so. Some might argue that it should be an adverb like "fully", but if it's correct to say that something is 100% correct, I don't know why it wouldn't be correct to use that as an identifier.

Not really. There's nothing "wrong" with it per se, but it doesn't sound as natural as "this pronunciation is 100% correct" or "this is the correct pronunciation". I agree with others who have said that it's not clear what percentages mean in this context. Also, in English, correct means 100% correct unless otherwise specified (ie partially correct), so it's redundant to say 100% correct. This redundancy can be used for emphasis ("That answer is 100% correct" is stronger praise than "That answer is correct"), but it's not typically used that way as an identifier ("That is the 100% correct answer" sounds a bit weird).

‘100% correct’ is grammatically correct in this context, though the organization of the sentence is a bit atypical for many more formal dialects of English and may be difficult for some people to understand without having to think a bit (I would instead restructure things as suggested at the end of Astralbee’s answer as that resolves both issues).

However, it’s not really semantically correct in this context for two reasons:

In a friendly situation, "100%" is often used in place of "completely" or "absolutely" or "perfect". For example, calling a hamburger "100% delicious". It's a funny metaphor suggesting that a deliciousness-meter would bang the needle at the far side. People might even say "110% delicious".

But in a less-than-friendly situation "100%" can be too forceful, and rude. You could have said 95% or any other number, but chose 100%, implying that anyone who disagrees with you is very, very, very wrong. In the case of "100% correct pronunciation" it seems to say that's the only way to say it, and any other way, even a little different, is 0% correct.

If someone asked "can I say it like in this video", then replying "sure, the video says it 100% correctly" is fine -- you're reassuring them in a positive way. But if you corrected how they say it and said "listen to this video, it's 100% correct", the "100%" is just rude. But if you said they were 90% correct and the video was 100% correct, that's fine since you're using %'s as an alternate way of saying the positive statement "your pronunciation is very close to perfect".

Echoing others' answers: whether or not it is "correct" by some standard, it would sound completely fine in an informal setting, and might sound a bit silly in a more formal setting.

That is, as others have already noted, the assertion cannot be literally true, because that alleged literal true statement does not admit precise parsing.

For a slightly more formal/dignified version, I'd say "completely correct" rather than "100% correct". Or, hm, just "correct". :)

The sentence It is the 100% correct pronunciation of 'mischievous' you just heard in the video is grammatical, but it is ambiguous, and it is unidiomatic.

It is grammatical because it agrees with the rules of how English noun phrases can be constructed. The pattern of the 100% correct pronunciation of 'mischievous' can be analysed as DETERMINER + ADJECTIVE PHRASE + HEAD, which is a rather frequent pattern in English. Struturally, the noun phrase at hand may be analysed like so: 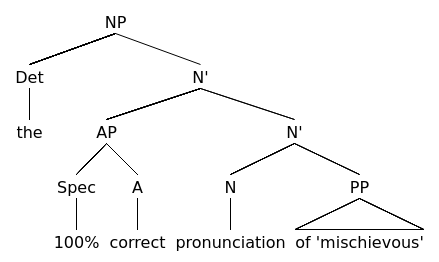 So, there's nothing wrong with the grammar of your sentence.

But your sentence is ambiguous because you just heard in the video could either be a relative clause or a subordinate that clause.

The expression is unidiomatic because (American) English speakers appear to prefer the indefinite article in noun phrases that contain 100 percent + ADJ as an attributive modifier of the head. This is supported by numbers from the Corpus of Contemporary English (COCA). This can be tested using the search string a|the 100 percent ADJ NOUN, which searches for combinations of 100 percent and any adjective which is followed by a noun preceded by either a or the.

The definite article is found in only 12 tokens, at least five of which are questionable because it's not clear whether 100 percent modifies the following adjective or acts as a modifier of the nominal that consists of the adjective and the head noun. Here are the remaining seven cases from COCA that should have a structure analogous to the one in your sentence:

After London, the [100 percent recyclable] sculpture made the rounds on a tour

And the [100 percent federal] reimbursement of debris cleanup […]

articles attacking their marriage, such as the [100 percent misguided] prediction that Odom 's departure…

We came up with the middle-class tax cut plus the [100 percent tax-deductible] tuition... Excuse me.

Tokens in which the construction 100 percent + ADJ + NOUN is preceded by the indefinite article a are much more frequent in COCA. The total number of hits is 75, and while I didn't go through all of them, I'd estimate that at least 60 of them are cases that contain an Adjective Phrase [100 percent + ADJ] as in your data. Here are the first seven confirmed instances:

the SAFEST bet is to shoot for a [100 percent healthy] weight and stay there?

If we get a [100 percent accurate] vote count in Florida, then every state's […]

A [100 percent UV-protected] polypropylene cover will be available […]

Gambineri added that untreated rabies can cause nearly a [100 percent fatal] illness in humans, and that the viruses […]

of securing our airports . Although it seems clear that a [100 percent secure] airport is years away , it is important to realize

The log-likelihood test is one of the established ways of determining whether the frequency difference between two corpus searches is statistically significant. I used the Lancaster LL calculator for that purpose. Indeed, assuming a frequency of 7 for the definite article, the lower estimate 60 for the indefinite article, and a corpus size of 1 billion for COCA, the difference is indeed statistically significant (LL=48.02, p<0.001). The effect size estimators such as the Bayes factor show that this is a very strong effect (Bayes=26.06).

Based on this, my prediction would be that if you did an acceptability rating task for your original sentence (which includes the definite article), and if you then repeated the task with the indefinite article, your speakers would find the second variant notably more acceptable.

I would say "perfectly correct" or "exactly correct." Using "100%" is weird because it's not something that can be quantitatively measured (or even defined).

I would say "100% correct" means "indisputably correct". Ironically, I think the phrase "100% correct" is itself 100% correct. I am speaking rhetorically. Of course, there is nothing to stop anyone disputing my interpretation.

4
How to say that you feel apologetic toward someone?
0
How do I ask 'what to fill in blank'?
1
Could all "auxiliary" be used at the beginning of the sentence
0
The usage of "as well as"
2
"simply can not be" or "can not simply be"
1
The phrase "look out to something"
1
Is it correct to say "my children often rummage in my bag" in everyday conversation?
1
Where to place the word "even": 1) "I am amazed even you would choose the day ......" or 2) "I am amazed you would even choose the day ....."