I lived in Australia for a few years and I knew that they sold gas (LPG), diesel and petrol in stations.

I am not a car expert, but it seems that when you buy your car in Australia, you need to ask if the car runs on gas, diesel and petrol.

Some people in the USA say "my car runs on propane" but "propane" doesn't sound like an easy word.

As the 'G' in 'LPG' stands for 'gas', to say "LPG gas" would be a tautology in British or Australian English. In American English, it would just be confusing.

The American use of 'gas' for what British and Australian English speakers call 'petrol' is an abbreviation of gasoline. Other territories call LPG 'gas' because it actually is a mixture of hydrocarbon gases such as propane and butane, in liquid form. So to call 'LPG' a type of gasoline would be incorrect.

You should just refer to it as 'LPG' (or whatever other term seems to be used in the area you are living in/visiting - comments have suggested that some Americans refer to it as propane or autogas... it seems like nobody can agree on what it's definitely called) so as not to confuse it with gasoline. Similarly, you wouldn't say "diesel gas" - you'd just say "diesel".

I have found that some people use "petrol" or "gas" as an umbrella term for all kinds of fuel - in the UK and the USA places that vend fuel are called petrol stations and gas stations respectively. But most people will use the specific term for the kind of fuel their vehicle uses, to avoid confusion and for correctness. If you want an umbrella term for all these things then use 'fuel'.

LPG would typically be called propane or autogas in the United States. It may also be known as LPG, just as in other countries.

There's a lot of folks here telling you that propane/LPG isn't used as a vehicle fuel in the United States.

It was used a lot on farms to power tractors and pickup trucks. I remember farm kids telling me how they'd cool their drinks while working in the fields in the summer by venting a blast of propane from the (tractor or pickup) tank onto the bottle. That had to be done carefully - too little and it wouldn't cool, too much and the bottle would cool so fast it'd burst.

There are still lots of people using propane in the USA. This page from the U.S. Department of Energy details current usage - mostly in fleets, but some personal vehicles. That page also mentions that it is also called "autogas."

This page shows fuelling station availability across the USA and Canada. There's 1241 publicly accessible fuelling stations for LPG in the USA. That's far more than for liquefied natural gas (55 stations) though far less than bio-ethanol (3962.)

It might not be common, or even commonly known, but propane/LPG is known and used in the USA.

Farms usually had a large propane tank that would be filled by a local delivery company.

Tractors and pickups could be refueled from the large tank, and not need to go to town for fueling. They didn't need a fuelling station - they just fuelled up "at home."

The most common term in spoken American English is "propane". Sometimes you will see "LP gas" or "LPG", but usually in written materials like manuals and labels. I've never heard the term "autogas" until today.

Few personal vehicles run on propane, and while there are many places where propane cylinders can be purchased or refilled, I've never noticed a public station selling propane for cars, but they do exist. There isn't one in the city of 100,000 people where I live. Some city busses or other fleets run on propane or sometimes natural gas, but these have private refueling stations.

In American English, "gas" is short for "gasoline". It's a liquid (not a gas) and what would be called petrol elsewhere.

Diesel is still just diesel. Cars running on diesel are less common in the US, but they do exist. Most gas stations sell diesel, mostly for larger pickup trucks and the large semi trucks used to commercially transport large trailers.

"My car runs on propane" is the correct phrase. Americans are familiar with the term "propane".

If an American is confused when you say "my car runs on propane", it's not because of your language usage, it's because in America it's very rare for a car to run on propane, as others state.

The common term for that fuel in the United States of America is "propane".

The fuel is much more commonly used in grills than automobiles.

The term "propane" is commonly used, it's firmly established in pop culture, for example the animated series King of the Hill. 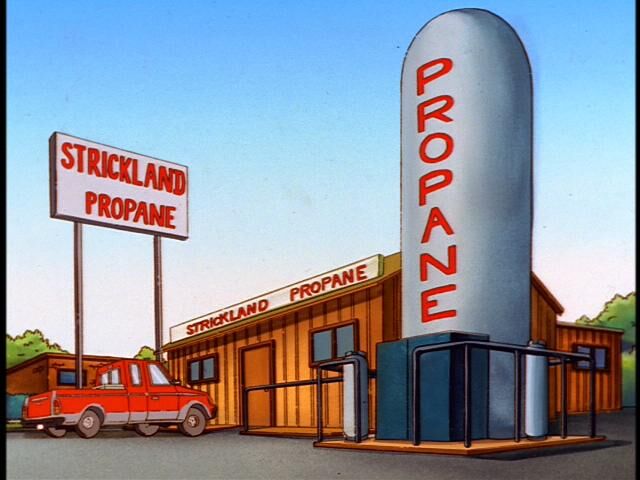 Diesel is diesel, petrol is gas (as in gasoline), and LPG is propane.

I don't think I've ever seen a personal vehicle that runs on propane. Certainly not a typical car or truck from a dealership. Some fleet vehicles like city buses run on natural gas, but those are still uncommon here.

In the US, propane is mostly sold in small tanks to run heaters and stoves for campers, grills, and other portable appliances. Gas stations (and some grocery stores) have it setup so you drop off a spent tank and pick up a fresh one, but there are places where you can refill your own as well.

In terms of personal vehicles, there is pretty much just gas and diesel here. We only use unleaded gas and that's split into octanes (89, 91, 93) and ethanol flex-fuel blends (the ethanol distinction only matters if you have a really old car though).

2
How to say the car has no more gas
6
What do you call in the USA the people of English ancestry?
1
When I say I smell gas, do you think of gasoline, or natural gas?
0
Do we say "you infected me with your disease" or "you transmitted your disease to me" or other common ways to express the same idea?
0
Is it natural to say "You made your mom bleed", "You made your mom bleeding", "… mom being bleeding" or "…mom have bled"?
0
Is it correct to say "I am teasing you" when you wriggle your fingers in your son's neck or pinch his nose playfully?
2
Is it correct and natural to say "just to finish my thought" when you were interrupted and you want to finish what you wanted to say?
0
Thank you very much for your help. / Thank you very much for the help
0
Which one is the most natural: "keep your phone at hand," "keep your phone on hand" or "keep your phone with you"?