What's the meaning of "Grandma doesn't do Anaheim" and why is it funny?

I was watching Two and a Half Men and ran across this joke I don't understand. There is a laugh track that makes me think it is supposed to be funny. What is the meaning and why should I think it is funny? 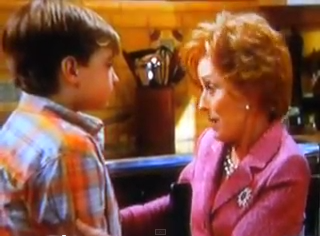 Two and a Half Men: Grandma doesn't do Anaheim

Evelyn: Because when your brother’s marriage ended… Yes, I know Alan… blah, blah, blah… [to Charlie] and he chose to move in here, your coldness towards your mother became more than just the behaviour of an ungrateful son. It’s now an obstacle to my spending time with my beloved grandchild.

Jake: Are you coming to Disneyland with us, Grandma?

Alan: Well, uh, we’d better hit the road. Try to beat the traffic. Thanks for dropping by, Mom. Come on, let’s go Jake. Race you to the car.

The grandmother just lambasted her son's inherent character for causing her to miss spending time with her grandson. She then ironically demonstrates, with equal insensitivity and haughtiness, that she cannot spend time with her grandson. In this case, her excuse for not going to Disneyland is because "she doesn't do Anaheim" (the city in which the theme park resides). As @TylerJamesYoung commented, this means "she doesn’t (want to) have anything to do with that city".

It's a rather absurd "reason" to not-spend time with her grandson, and one concludes, based on her character, that she really just doesn't want to go to Disneyland. She sidesteps that with "the fact" that she doesn't ever have anything to do with the city in general. It also smartly demonstrates that her prior demeaning statement to her son was merely a reflection of her own character.

The phrasing is funny because it's a play on a stereotypical template-phrase, "I don't do X" from the common disclaimer of maids, "I don't do windows." See, I don't do 'do'. (N.Y. Times).

Sometime during the 70's, the phrase, "I don't do X" became a social catchphrase, and was generally considered funny. It became a hallmark, stereotypical phrase of someone with a (possibly faux) insensitive superiority complex, often attributed comically to wealthy women and gay men. If a person didn't like chocolate, they might say, "I don't do chocolate" rather than "I don't like chocolate." If a person was asked if they had any pets, they could say, "Oh, I don't do pets." It was often said with a wry sense of faux-superiority (to be funny or sassy with a sarcastic tone).

In general, a sitcom's funny-factor increases with one's continued and increasing enjoyment and familiarity with the show and the individual characters. Also, a significant part of the funniness of a sitcom can be due to a social phenomenon as people talk and laugh about the sitcom.

The line certainly has many elements of humor (setup, irony, absurdity, social reference) and works both to reveal and build Evelyn's character for the audience. It's well-crafted and well-delivered. Whether anyone in particular actually thinks it's funny is a matter of opinion: as they say, "there's no accounting for taste". Personally, I find the segment funny because I enjoyed the show during it's run and I can see my own step-mother saying the same thing.

Anaheim is "A cultivar of the tropical pepper Capsicum annuum having long, tapering, mildly pungent green or red fruit" (definition from AHD). She means she does not use for sexual pleasure, while almost sounding as if she is talking about Anaheim city in context of Disney land. Wicked yet Witty humor :D

Not the answer you're looking for? Browse other questions tagged meaning meaning-in-context word-play .