I have heard a few people adding "just" to the phrase "be about to" for emphasis. For example:

I am just about to answer that.

But by definition, "be about to" means that you're going to do something very soon. In that sense, isn't adding "just" kind of redundant? And if adding "just" is ok, what about "almost" or "nearly"? They don't seem to roll off the tongue as well as "just" to me, but there shouldn't be any reason they're any less correct than "just".

The set phrase "just about to" is very widely used, and is generally used about time. You use when something occurred moments before you had planned to do something.

I was just about to have lunch when the doorbell rang

"almost about to" and "nearly about to* are, according to this NGram graph, much less common. They can also be used about time, but are more often used about state. They indicate that someone or something were close to a state where something might happen:

I was ... in hysterics facing Molly, who looked like she was almost about to collapse with laughter. - Road to Pheme, Colin Tuffney, 2004

I was nearly about to have a tantrum and stamp my feet, but I let her go on, my feelings sinking. - Dying to know, Josh Langley, 2014

There is a phrase "just about", here is a screenshot on Google 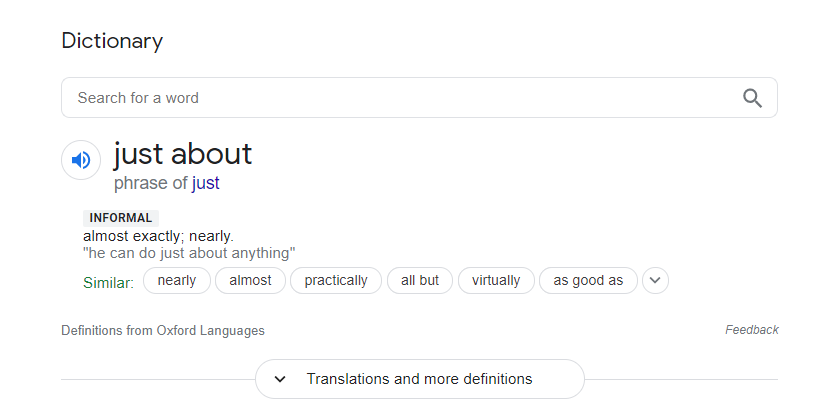 "Just about" can be used to say "almost" like "the pot is almost/just about boiling." The funny thing is that it works equally well if you say "the pot is about boiling," although saying it that way is less common and I think it was more common in the past. It's an example of how English has evolved over time.

Not the answer you're looking for? Browse other questions tagged expressions adverbs or ask your own question.

2
Can I use realize with "just" in the present tense?
1
A phrase about "my brain" and "programming"
1
What does "You would / I did / But really" mean?
3
What is a formal synonym phrase for "What the hell are you talking about"?
1
What's the difference between "almost" and "near" when talking about time?
0
'Almost' between the verb and the object
0
"anchored just south of the North Pole" or " anchored about south of the North Pole."
0
Can we say "x is almost double y" if x is more than y doubled?
0
What's the meaning of the word 'just' in this phrase: "There's never a point where you just gonna know everything."?