Per American pronunciation, "a ear" or "an ear"?

I just watched YEAR vs. EAR - American English Pronunciation (EAR vs. HEAR), and I hear absolutely no difference between the pronunciations of "ear" and "year", given we should use "a" for "year", can we use "a" for "ear"?

Most native speakers can hear the distinction. Like Peter Shor said, saying "an ear" and "a year" can help the listener understand which one you mean. Words beginning with vowel sounds always use "an", but words starting with consonants ("y" is a consonant here) use "a".

Some examples of "ear" and "year". All I can say is that "year" begins with a harder, tighter "y" sound, while "ear" has a relaxed, smooth "e" sound.

The huge majority of Americans do both make and hear a difference in the sound of the words "ear" and "year." That fact that you do not hear that difference merely means that one of the sounds does not exist in your native language. My daughter-in-law's native language is Cantonese. I cannot distinguish all six tones; my ear was not trained from a young age to register differences in tone.

I assure you that if you say

The girl is six ears old

Americans will understand you, but they will also immediately identify you as a non-native speaker.

OP here, I got a perfect answer from a friend of mine who masters multiple languages, including Mandarin and English.

Here's my translated version of the explanation which he originally said in Mandarin:

So, for "ear", it's pronounced more tightly, like tightening your throat, whereas "year" is more relaxed.

Now I can really tell the pronunciation difference between "year" and "ear".

Let me be completely honest, Rachel in her video is pronouncing the "Y" in "year" so short that even I, born and raised in the U.S., had to wind the video back and listen a second time to readily hear the difference. I've never heard anyone pronounce the consonant that short. It's so short that I expect that if I heard her pronounce the words "yes" and the vocalization for the letter "S" ("es"), I'd have trouble hearing the difference.

However, I readily admit that I might be an oddity in the U.S. (even though I believe I hear people stress the "Y" much more than Rachel does in her video). For example, I fully pronounce the "wh" sound in "wheat," where (apparently) so many people de-stress the "h" to pronounce the word "weet" that it was made fun of in the animated series Family Guy.

Finally, for full disclosure, the faster a person speaks, the shorter (unemphasized or de-stressed) the stresses become. Therefore, your experience with this problem is excellent, because as you meet people who speak at different speeds, you'll recognize how the consonants become both over-stressed and under-stressed. If you're having trouble hearing the consonant "Y", listen to Kristen from Tipsy Yak pronounce the very Texan word, "y'all." Listen to that "Y." Now pronounce the word "y'ear." Yup, that's closer to how it should sound. Well, at least it's closer to what I think it should sound like.

But, to answer your actual question (Source)

Remember, using a or an depends on the sound that begins the next word. So...

Here's an illustration of the speech organs from Vowels and Consonants by Peter Ladefoged: 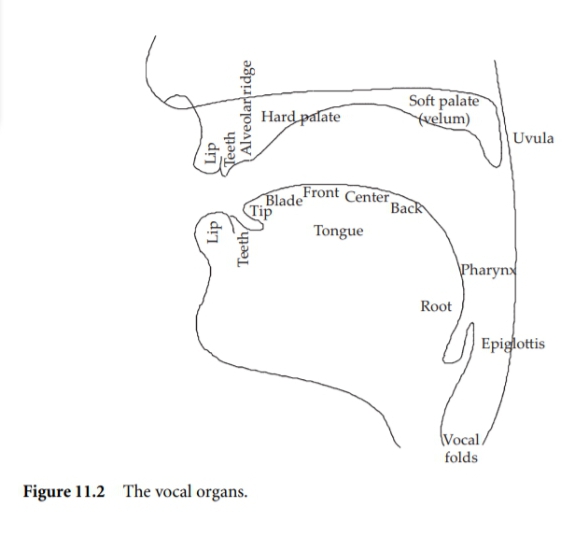 The sound at the beginning of year is called palatal approximant (/j/); the place where it is articulated/produced is the hard palate (as shown in the diagram). Unlike plosives (like p, t, k etc) there isn't any kind of closure of the vocal tract. It involves narrowing of the vocal tract at the hard palate but not narrow enough to produce turbulence, so it can be perceived as ‘harder’ or ‘tighter’.

Anothe difference between /j/ and the vowel /i/ is that the vowel can form the peak of the syllable but /j/ can't.

According to this article (University of Manitoba):

The word "year" begins with the consonant "y", which is also found in these words:

Whereas the word ear begins with a vowel.

Not the answer you're looking for? Browse other questions tagged american-english pronunciation spoken-english indefinite-article listening or ask your own question.