What is the subject of “With great power comes great responsibility.”?

What is the subject of the sentence? Is “With great power” the subject? Could you please give me more sentences written in that grammar?

Your sentence looks like a saying, and it uses subject-verb inversion to give more impact.

The normal word order would be:

As you can see, it sounds less emphatic than

where the weight of the sentence falls on great responsibility.

Here are other examples:

Great responsibility is the subject. The sentence is written in inverted form to emphasise that if you have power you also have responsibility.

In the little house lived an old man.

Without sunshine, life on earth would not be possible.

As the other answers have pointed out, the normal word order would be, “Great responsibility comes with great power.” Inverting the word order doesn’t change the meaning, but makes the sentence sound more formal. It’s especially typical of old-fashioned poetry, which often needed to rearrange a sentence to fit a particular rhyme scheme and meter. This homily is also familiar enough that native speakers are likely to recognize it.

Leaving aside forerunners that were translated from other languages, such as Luke 12:48, we have numerous versions of it in modern English, whose word order varies considerably. I’ll add emphasis to the subject of each sentence.

Franklin D. Roosevelt, 1945: “power must be linked with responsibility, and obliged to defend and justify itself within the framework of the general good.”

“Superman Comes to Earth,” 1948: “Because of these great powers—your speed and strength, your x-ray vision and super-sensitive hearing—you have a great responsibility.”

The version you give, though, is most associated with Stan Lee and Steve Ditko’s Spider-Man. His first story in 1962 ends with a slightly-longer version: 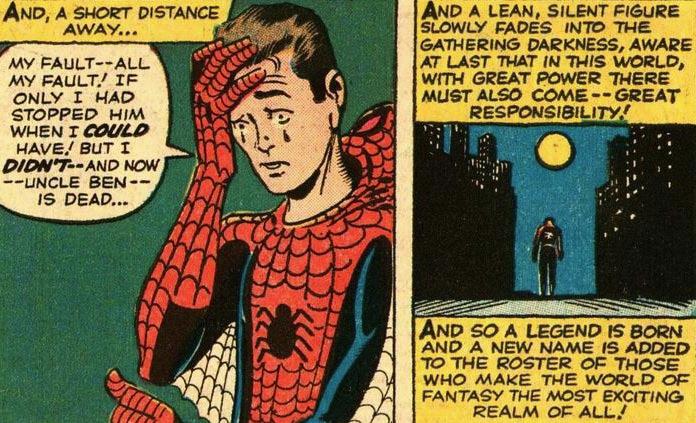 The 2002 film Spider-Man had Uncle Ben say, “Remember, with great power comes great responsibility,” in his last conversation with Peter Parker before he died. (Very similar to how Superman heard the same lesson from his father-figure before the latter died, fourteen years before Spider-Man was created.) This became the best-known version.

You can also see the adage getting shorter and pithier over time. The version that caught on is, explicitly, an abridgment of Stan Lee’s “... aware at last that in this world, with great power there must also come—great responsibility.” This itself is similar to the word order of Winston Churchill’s quote. “Where there is great power, there is great responsibility, ....” but shorter and simpler: Churchill said it as a compound sentence whose parts all have subordinate clauses.

But this sentence does not work: One would understand it (outside the context of this discussion, at least) as "power flows from responsibility" which is the opposite of what is meant.

The word order in all these cases is essential: It must reflect the flow of causation. If we change it, like in the examples, the causal relationship is changed with it.

The actually interesting question may then be why the relation is not expressed the natural way: "Great Power comes with great responsibility." Unambiguous, straight-forward. Great power is there first, and it is inevitably accompanied by responsibility. But by having power be the subject, this sentence is perhaps too power-centric, while we actually would like to emphasize the responsibility. So we make responsibility the subject, the center of attention and not the sidekick. But then we lose the logical flow, so we have to invert the normal word order.

As a rhetorical side effect, the unusual word order creates a little stumble and may renew the attention of a sleepy audience; it is even pretty catchy, isn't it?

Not the answer you're looking for? Browse other questions tagged parsing .