How can a person pick out a “most boring” thing?

When Mr. and Mrs. Dursley woke up on the dull, gray Tuesday our story starts, there was nothing about the cloudy sky outside to suggest that strange and mysterious things would soon be happening all over the country. Mr. Dursley hummed as he picked out his most boring tie for work, and Mrs. Dursley gossiped away happily as she wrestled a screaming Dudley into his high chair.
(Harry Potter)

It seems that "picked out his most boring tie" creates an antinomy [contradiction]. How can a person pick something boring out for work? Is there a certain meaning for boring with materials, or am I wrong in understanding the word?

This is an example of style. Ms Rowling is using, erm, an antinomy to make a (somewhat) humorous point.

No, there isn't a certain meaning for 'boring' with materials. It means not interesting, or tedious*.

You are correct in thinking it strange you normally wouldn't pick out a boring tie (or anything else) to wear. How you dress shows your style (regardless of whether you dress to impress, whether you have a complete lack of style, or whether your attitude toward being stylish is one of 'who cares?'). Generally, people wouldn't like to show themselves as being boring (even if they are).

But this is the author's point. The reader's feelings for the Dursleys are generally those of antipathy, due to the behaviour that they have demonstrated. Given this, one would not be surprised to find their behaviour in other areas to be less than appealing (especially to the average reader). Therefore, in Mr Dursley's case choosing a boring tie is entirely appropriate for the sort of person he has been shown to be.

So, essentially, yes, it is an odd way to behave, but the author is making a point of that oddness, so in the context of the story, it does make sense.

*: In this context. Boring also means drilling a big hole, but that's not relevant right now.

In the context of fashion, boring would be an antonym for flashy, and a "boring tie" would be one unlikely to catch someone's attention.

So, if these were the ties available in the closet: 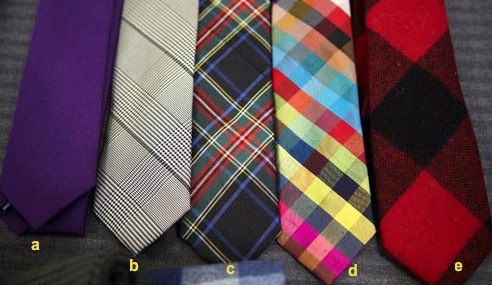 I would say that (especially with a white dress shirt):

and also – especially in comparison with the others:

In this fashion context, boring could be a synonym for understated, although I'd probably consider understated to have more positive, professional overtones, and boring to be more negative, and perhaps a somewhat slangier term. If I thought someone was dressed too flashy, I might say:

Why don't you try a more understated tie?

whereas if I thought their outfit looked too plain for the occasion, I might say:

Why don't you try a less boring tie?

Lady Gaga is not exactly known for wearing boring clothes.

as a way of saying:

Lady Gaga is known for her outlandish outfits.

With all that said, I think it's important to back up what mcalex mentioned in his answer. The author is doing some character development, and I very much doubt that Mr. Dursley's closet is filled with ties like the ones I've depicted above. Instead, I would guess that all of his ties are rather mundane, but, on this boring day, Mr. Dursley picked out the most boring tie out of all his boring neckties.

5
Is 'a' implying one of the family?
1
How to understand the phrase “pick me up in his van”?
0
How can car drive itself?
1
Can “for the rest” only refer to one thing?
0
How can vengeance be 'sanitised'?
0
Meaning of “Studying electronics as long as I could pick out my own books”?
0
when we can use freak out?
1
How can something “simple” be “striking”?
0
How to understand “All most suspicious” in this context?