What does the phrase "in plan" mean in this Wikipedia page? (is this a typo?)

In architecture, a quadrangle (or colloquially, a quad) is a space or a courtyard, usually rectangular (square or oblong) in plan, the sides of which are entirely or mainly occupied by parts of a large building (or several smaller buildings).

The word "plan" is a noun, therefore I believe it to be a typo (no article). Another word that comes to mind is the word "plane" which is an adjective as well as a noun:

But these also don't fit for me somehow.

I don't know the technical term for it, but I believe this is a common pattern for nouns describing aspects of something:

The pattern is that "X (concrete noun) is Y (adjective) in Z (aspect noun)" means roughly "the Z (aspect noun) of X (concrete noun) is Y (adjective)". So "the sky was red in colour" means "the colour of the sky is red", and "the building is rectangular in plan" means "the plan of the building is rectangular".

The "plan" in this case is a noun meaning something like "shape as seen from above", as opposed to "profile" or "elevation", meaning "shape as seen from the side or front". As others have pointed out, this comes from the architectural meaning of "plan", for a flat diagram of a building in such an overhead view.

In this context "plan" is an adjective describing a drawing or view and is distinct from "section" and "elevation". See Plan, Section, Elevation Architectural Drawings Explained In that phrase "in plan" is an abbreviation of "in plan view". 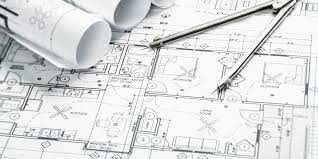 aka blueprint; a schematic drawing of something from overhead, rather like a map; a piece of paper with marks on it indicating the arrangement, layout, of the building or device in question.

Not the answer you're looking for? Browse other questions tagged phrase-meaning word-meaning or ask your own question.