There's an idiom in Hindi

The context where it is used -

This phrase is always used in a sarcastic way advising someone to go, die or commit suicide because they could not perform at all in the field they master.

If I am a pro at the language English and if I cannot explain what is verb, you will say, "चुल्लू भर पानी में डूब जा".

The closest phrase I can think of is Couldn't you explain what is verb? Shame on you. But this is much milder than the idiom in Hindi. What else it could be? Go, hang yourself? Is it valid and understood in the context?

Actually, I can think of a few a colloquial expressions used in this situation, at least in my neck of the woods:

You want to be an English major and can't even explain what a verb is? You may as well hang it up.

...meaning "You better forget about becoming an English major and pick another subject."

An English major who can't explain what a verb is? Don't quit your day job.

...meaning "Don't quit your other job, because you won't make any money as an English major."

Some English major! You can't even explain what a verb is!

There are a number of American idioms that suggest suicide, but they may be used in slightly different situations.

In the example you gave, of someone being bad at their job, an English speaker would probably not suggest suicide; instead, it would be idiomatic to say something like:

You ought to be ashamed of yourself.

or some of CocoPop's suggestions. At a stretch, you might say:

You really can't even define a verb? You might as well just go kill yourself right now.

But this would be extremely rude to say to a stranger, and even said to a friend might be taken wrong.

On the other hand, in English, if someone is annoyed and wants another person to go away, he or she might say something like:

Go take a long walk off a short pier!

Why don't you go take a flying leap?

Go jump off a cliff!

These are rude ways of telling someone to go away, that you don't want to see them again. Because this is the way they are used in English, if you say something along these lines it will probably be interpreted as you telling the person you want them to leave and not come back, rather than as a criticism of their abilities.

Although in Dutch it not uncommon to command someone to die (albeit in any way, suicide or not), I'm not familiar with that exact dismissal used in English (at least, idiomatically).

I am not sure about the register in which the Hindi expression is used, but if you are looking for something really blunt, you could tell someone to have carnal knowledge of oneself (go fuck yourself).

Do not use this in any but the most informal situations - it is highly likely people will take offence!

The English meme, dated January 27th, 2018, from Roblox is: "Go commit die", but it's use is noticed on Google Trends much earlier: 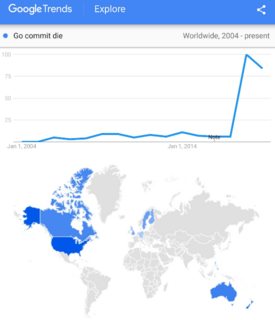 Other English expressions involving hanging oneself or walks on a short pier are not as close a one-to-one translation.

On Quora these translations are offered:

Hindi: ‘Chull bhar paani me doob mar’
English : ‘You should be ashamed of yourself’

“Go die” (imperative sentence)
"Drown yourself in handful of water”
The best fit is “shame on you”, “look at yourself” etc.

"... because they could not perform at all in the field they master."

The Urban Dictionary seems to have support for "kill yourself" but the expression is so old that I'd forgotten it, perhaps some grandparents are using it; certainly not mine.

2
"Take a flying leap": is that down or off something, to your death?