A headline from a BBC News app on my mobile reads:

I could not find this on the BBC website, but it shows on my cellphone. 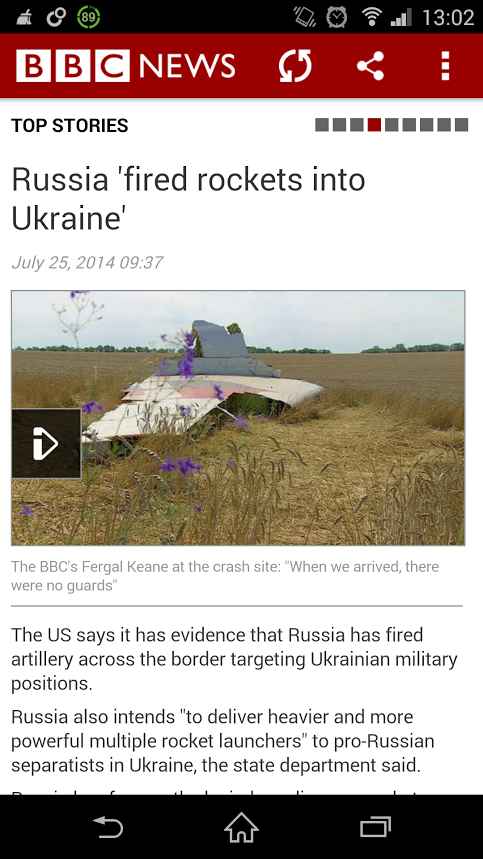 Why into? You fire at someone/something. Maybe into refers to somewhere inside Ukraine but it looks a poor use of the preposition.

"in" would not be appropriate, since that would imply that Russia fired the rocket from Ukraine.

"at" would not be appropriate, because they weren't aiming at Ukraine: they were aiming at some more specific target within Ukraine.

To hit that target, the rocket must go into Ukraine. The article is emphasizing how Russia crossed the border with their rocket.

(Of course these accusations are at the moment not proven, but this is about English, not politics or news.) 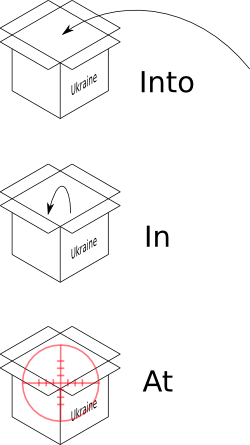 Firing a missile at something would mean that I am firing at a target.

Unless Russia is firing very powerful nuclear weapons, it would be strange to think that it is aiming at "Ukraine" as its target.

It would be hard to miss, but it would certainly not be a big feat either.

In this case, what is meant is that Russia fired missiles at targets that are somewhere inside Ukraine. The wording is chosen to emphasize the fact that Russia did not move into Ukraine to fire, but that they are firing from within Russia to a target within Ukraine.

Obviously, the actual targets are either unknown or deemed unimportant to be mentioned in the headline: the main message is not that some target was fired at, but that a country that denies all military involvement in this conflict is now said to have fired missiles that crossed the border of what is internationally still regarded as an autonomous country.

Not at all a poor use of a preposition. Perhaps it's somewhat idiomatic, but into is a commonly-used preposition when talking about rockets and missles, whether those are being fired into space, into the ocean, or into enemy territory.

Against von Braun's fervent hope that this would not happen, German military forces launched more than thirteen hundred V-2s at targets in England, and more than sixteen hundred V-2s into Belgium and France
Source: Stuhlinger & Ordway, Wernher von Braun, Crusader for Space, 1994

The preposition at is common when specifying a particular target, but into is frequently used to indicate that a missile or rocket landed inside a particular region or country.

The missiles went from Russia in the direction of Ukraine, but they did not necessarily get as far as Ukraine. People would read this to mean that they did not in fact reach Ukraine, since otherwise they would have used a different preposition to make it clear that the missile had reached the Ukraine, which makes a more shocking headline.

Someone associated with Russia, perhaps Russian soldiers, while inside Ukraine's borders, fired a rocket.

Missiles were fired from Russia, and the missile did end up inside Ukraine's borders.

You are quite right that logically you would fire at Ukraine since Russia aimed to attack Ukraine, however, being English myself I know that this is actually valid and correct English (to say "into").

It is more of a local quirk (I am currently studying Arabic where I have to compare quirks between my own language and theirs) within the English language; that when talking about vast areas/entities like this, i.e. regions/countries (Ukraine being a region and an entity), you are more likely to say "into", irrespective of what armament was used.

However if you were talking about something smaller and more specific, say, a plane then "at" should be used. Another example of specifics would be "firing at Ukrainian soldiers" which of course the quote you see in the title later refers to (I read the story earlier today).

This seems fine in American 4th grade. However, ' and ' seem to imply that someone may have stated this phrase in other press. Are there any cited names listed in the rest of the article other than the reporter?

Being on that mobile os is that your cache and/or news results may be poisoned by another running app. I've seen this before on android.