I was trying to translate portafinestra in English, and I think I found the correct term (French window) whose definition seems to match with what I would define portafinestra: "each of a pair of casement windows extending to the floor in an outside wall, serving as a window and door."

Can I call French window those doors that are opened by sliding them? If it is not the right term, what is a term that I could use also for sliding doors facing on an outside wall?

There are a lot of factors at work here.

As Barrie mentioned, doors that open to the backyard are called patio doors. Patio doors can have two styles: sliding, or hinged.

In the U.S., the sliding style doors are often called "sliding glass doors." The term "French doors" is used for double doors that open outward or inward, particularly when they are made of paned glass.

I found these two images on a retail web site: 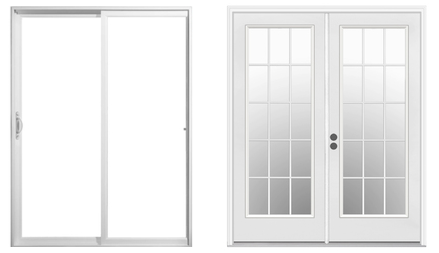 The door on the left is listed as a Sliding Patio Door; the one on the right is a French Inswing Patio Door. However, in day-to-day conversation, I'd probably refer them as "the sliding glass door" or "the French doors" – although either of them could be called "the patio door."

With all that said, though, I still found a website that sells "French-Style Sliding Doors," which sounds like an oxymoron to me.

In the UK, sliding doors of the kind you describe are referred to as patio doors when they open onto an external paved area.

I can't speak for common usage in the US, but in the England, we used to just have doors, which were mostly solid wood and opened all the way to the ground, and windows, which were glazed and didn't. Some hundreds of years ago, however, it was noted that in France, some rooms had windows (with glazed panes much like ours) that extended all the way to the ground. These "long" windows, often be in pairs (and only ever of the hinged type) would provide access to the balcony or the garden and facilitate a nice air flow in warmer weather. Architects in England started to incorporate the full-length hinged windows into their designs and they were referred to as "french windows", but only used in place of a window - the main front door of a house would still be largely solid wood. The term "french door" is meaningless - unless you mean a door in France. If you are talking about a pair of hinged, glazed doors, say just that. In England, we should say "french windows" (or "patio doors" if they slide).