Which is more common, "on the air" or "on air" The TV show was on air many years ago.

The TV show was on the air many years ago.

Webster's dictionary defines "on the air" as an idiomatic term for broadcasting, and in the same entry notes that 'on air' is a "less common variant".

However, this ngram would suggest otherwise, with "live on air" being used far more than "live on the air".

This image is typical of the kind of sign you expect to see outside a radio or television studio. I searched for images of these and they were overwhelmingly "on air", with only the odd one saying "on the air", and those looked like mock-ups rather than real photographs. 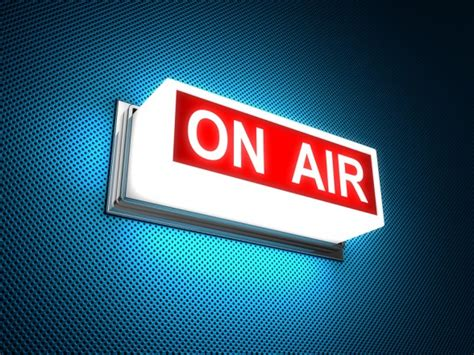 Signage is usually abbreviated, so the fact they say "on air" doesn't mean that is the correct phrase. However, it may be that the abbreviation has come to be used more frequently. I have certainly heard both, and I don't believe either is incorrect. Personally, I would tend to use "on air" with reference to live broadcasting (eg "the show is on air right now") and "on the air" with reference to programming that is currently scheduled (eg "the show has been on the air for ten years", meaning it is still airing regularly, not constantly broadcasting that long).

Not the answer you're looking for? Browse other questions tagged phrase-usage articles prepositional-phrases .

2
What article should I use for "air conditioning"?
7
Why do we say 'in the air', not 'in air'?
3
Can "n years old" describe things, or only people?
0
There hasn't been anyone living at a place/in a house/apartment for the last two years
2
Is it still common to hear the expression 'go bonkers' in the US in daily conversations?
6
"You've called the wrong number" or "You called the wrong number"
1
"started as designer and supplier of " VS "started as the designer and supplier of "
1
just at the time that I dated my creation
0
do we say "the balloon is popped" or "the balloon has been popped" or "the balloon was popped" according to the time that we utter it?
2
Can I say "thank you for having us" before the end of a visit?