What is this stuffed pastry called in English? 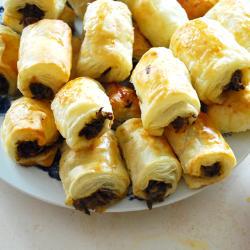 It's a puff pastry stuffed with meat, mushrooms and spices, a roll cut into such small pieces. I wanted to brag about these on a forum except I realized I have no clue what they are called in English.

I would describe the OP's dish as being neither pasties nor patties.

Wikipedia defines a Cornish pasty as being:

... shaped like a ‘D’ and crimped on one side, not on the top. Its ingredients should include uncooked beef, swede (called turnip in Cornwall), potato and onion, with a light seasoning of salt and pepper, keeping a chunky texture. The pastry should be golden and retain its shape when cooked and cooled 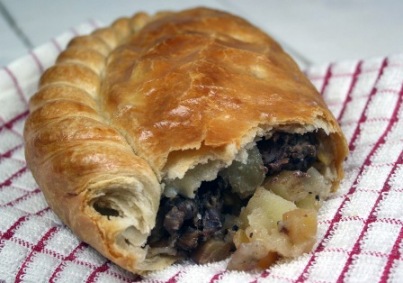 I believe the dish cooked by the OP does not resemble a pasty in the slightest.

Patties don't quite work for me either. There is a popular dish in Jamaica called, interestingly enough, Jamaican patty.

In the article the patty is described thus:

... contains various fillings and spices baked inside a flaky shell, often tinted golden yellow with an egg yolk mixture or turmeric. It is made like a turnover but is more savoury. 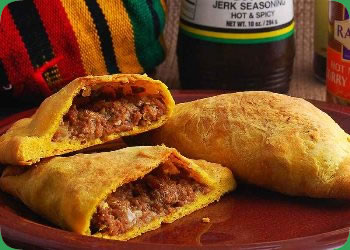 In Italy this type of stodgy finger food is virtually non-existent and has never really caught on in fashion. However, if an Italian had to describe the OP's snack food, they might describe it as being vol-au-vents. Vol-au-vents are always made from puff pastry, the small, golden-coloured shell cases are usually filled with a creamy savoury filling. 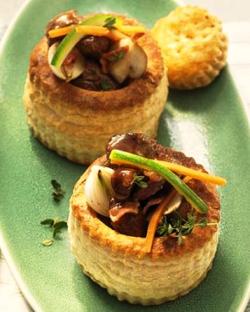 However, in the UK, as Barrie England pointed out, they would be recognized simply as sausage rolls, i.e., puff, flaky or short crust pastry, filled with sausage meat, rolled and baked in the oven. The most popular rolls are in fact made with sausages, but there are many variations on this theme, and not all of them need to be savoury. Due to their bite-sized portions they'll often be called mini-sausage rolls. 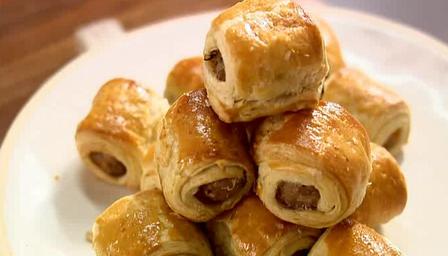 Comparing the photos of the mini-sausage rolls with that of the OP's it seems pretty clear to me that the two snack foods share many similarities.

If one wanted to impress their guests with a fancy sounding name, I'd opt for vol-au-vent and call the mouthwatering dish, Beef and mushroom vol-au-vents. Otherwise, if your guests are unfamiliar with the term Paszteciki, I would suggest the more British sounding Spicy beef mushroom rolls

They look like sausage rolls, which traditionally contain, well, sausages. They could also be spring rolls, a supposedly Chinese preparation. If you wanted to be precise, I suppose you could call them meat, mushroom and spice rolls.

English cuisine doesn't have anything quite like this, so unsurprisingly, there's no directly equivalent term. Your choices in such a case are (1) use the native term and hope it catches on (like, say, pierogis have), or (2) find the closest equivalent in English cuisine, and use that term, possibly with an ethnic marker. For the latter option, pasty (or pastie) or Polish pasty is probably your best bet, since it's the only word I know that implies a savory filling. (In contrast, both pie and pastry tend to imply a sweet filling.)

Just be careful, because no matter how you spell it, pasty can have an entirely different meaning. Make it clear that you're talking about food before you use this term.

Google suggests that "paszteciki" are a kind of "pasties", but bytebuster found "puff patties". Both look very similar: the words "pasties" and "patties" as well as the photos of the meals. Being neither Polish nor English native speaker, I have to admit that I cannot decide which it is. (Maybe even both are used depending on details of the recipe?)

Not the answer you're looking for? Browse other questions tagged word-request nouns or ask your own question.