Referring to more than one species as "fishes"

I have stumbled upon this picture. 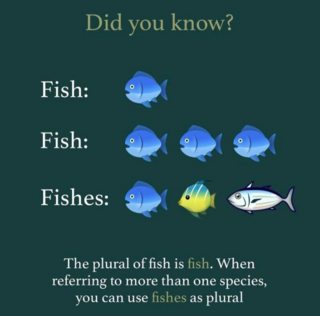 Is correct that one can refer to more than one species as "fishes"? Is it a common usage?

None of the following site questions or online dictionary gave me an exact answer:

However, I have found the following usage:

Yes, this usage can be heard. However, in North American English, at least, it would be more common and comprehensible to say "types of fish" or "kinds of fish".

Note that some people use "fishes" as the plural of "fish"anyway, and they raise eyebrows, but it's not impossible. I wonder if this is what makes this usage sound plausible, whereas I would find "sheeps" for "kinds of sheep" very strange.

There are some nouns this seems to work better for this operation than others. For example, "five meats", based on the mass noun "meat", clearly means "five kinds of meat". But "five beers" could mean five bottles or five kinds — even though "beer" is also originally a mass noun. In most cases, you can just add "different" and talk about "five different beers" to be clearer.

The plural of fish is usually fish.
When referring to more than one species of fish,
especially in a scientific context,
you can use fishes as the plural.

In short, using "fishes" like this is a "convention" observed by some in the scientific community. But not everyone would recognise the distinction anyway, so unless you work in that "domain-specific" context (in which case you should copy whatever usage you encounter from Anglophone colleagues or research texts), I think the safest thing is to forget about fishes (which most non-scientists today would simply think of as "quaint, old-fashioned" anyway).

Not the answer you're looking for? Browse other questions tagged word-usage word-choice singular-vs-plural .

5
Fish vs Fishes for plural use
0
"fish" vs "fishes" Which one is correct here?

0
"more than pack" or "more than packing"
1
What word describes knowledge interesting for more than one field?
1
When is "labor" countable and what does "labors" mean exactly?
1
Should I use "who" or "which" when referring to a specific animal species?
9
Should we use "kelvins" or "kelvin" when referring to temperatures higher than one?
4
Word for a specific crutch gait
0
"The panda is an endangered species" "Pandas are an endangered species"... Which would be acceptable?