What does "Bavarian Oom-pah tune" mean?

I was watching this video: https://youtu.be/7ji0ppAJjMg?t=435

Context: Samsung has filed a patent for a "Z-fold" phone that folds in two places, rather than just one.

"Samsung is the farthest along in this folding phone race, but at this rate it feels like we're only a couple of years off from the first accordion folding phone, which, according to its patents, will play you a Bavarian oom-pah tune."

I couldn't understand what he meant by "Bavarian oom-pah tune".

What I got so far from the internet are:

1.Bavaria is a place in Germany!

2.Oom-pah tune is some kind of a sound of a deep brass instruments!

It felt like he was trying to be sarcastic. But didn't get the idea. Why is it funny if a thing can play "Bavarian Oom-pah tune"?

I want to know what actually is he trying to say and why did he use this particular phrase! And how can I use this phrase to make a sentence!

Yes, it is sarcastic and intended to be funny. This might be cultural, and explaining a joke makes it less funny, but I'll try.

Firstly, you need to see an "oom-pah" band in action: https://www.youtube.com/watch?v=G9UqZOv8-OY. It's funny party music! It is drinking music, they are wearing outfits that are not how Bavarians dress when they go to the office. The style is raucous and humorous. It is folk music, not classical music.

The context is about a folding phone. One instrument used in German folk is the accordion. This is a box made with many folds. By squeezing it you push air through reeds that make noises. It is funny and ridiculous to imagine a phone that can be folded so much that you can use the phone as an accordion.

It is also a funny comment on the tech industry that, if Samsung were to make a phone that folded like this, they would patent it to prevent an Apple accordion phone. That is satire.

Phones have many useful functions. But certainly, working as an accordion and playing Oompah music is not one of them. Would you want to pay for a phone that did that? It is such a ridiculous idea that it is funny to suggest that Samsung might be trying to make such a thing.

I can see no situation that you are likely to want to use such a phrase. If you have survived this far without knowing what Oompah music is, or where Bavaria is, then think you will never need to use the phrase "Bavarian Oompah music" in your life. I would also bet that you will never again hear anyone ever say those words.

So really don't worry about this one random joke. It's not important.

Some background: Bavarian oom-pah music is a very light-hearted and often purposefully silly style of music. The traditional Bavarian clothes for playing it look silly to most people who live outside Bavaria.

Also, an accordion is a musical instrument that has many folds, and is commonly featured in Bavarian oom-pah music (though not in the video I linked above). 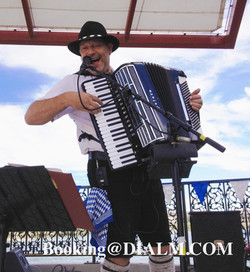 The host in the video is noticing that phones have gone from one fold to two folds very quickly, and jokingly predicts that in a couple years, phones will fold like accordions, and therefore play Bavarian oom-pah music.

We can infer from this that in the host's opinion, folding phones are ridiculous.