The piece of news from the Huffington Post reads...

In 2006, after 20 years sober, he checked himself into rehab for alcoholism. He opened up about his struggles with addiction to alcohol and cocaine in a powerful interview with The Guardian and on "Good Morning America."

What sort of use is that? An adjective after a noun clause without any preposition? Or better use noun for that reason? ...after 20 years of soberness... or something the like?

I checked all the examples of the word sober here, on MW but none of them fits the structure of HP.

In linguistics, ellipsis (from the Greek: ἔλλειψις, élleipsis, "omission") or elliptical construction refers to the omission from a clause of one or more words that are nevertheless understood in the context of the remaining elements. - wikipedia

In this case, the sentence carries the sense that he had been sober for 20 years, after which he lapsed.

The 'full' phrase would be something like "20 years (of being) sober", with the portion in the brackets omitted to give "20 years sober".

Note that ellipsis requires the context to fill in the meaning of the missing words. Often, as is the case in the examples in the wikipedia article linked above, the sentence itself would contain similar words - e.g. John can play the guitar, and Mary (can play) the violin.

That is not the case here, so we need to rely on the form being sufficiently common that the shorter form has become idiomatic.

The following 'real-life' example helps to establish that the suggested ellipsis is valid. The title of the following article refers to durations of sobriety, and the body of the article contains the ellipsed form. (Emphasis, mine.)

In the article: At 10 years sober, Becky seems like a success story.

Here is another example. This time, the title provides the ellipsed form and the body of the article contains the clue to the missing words.

Title: 5 Things I Learned About Addiction After 5 Years Sober

In the article: It's been a couple of years since I wrote on this subject, but the short version is that I used to be a slobbering drunk.

Although I would agree with ellipsis, I will propose substantive phrase and metonymy.

In this particular context, "20 years sober" (or "20 year sober", a variant) can be seen as a specific milestone in the life of an alcoholic with Alcoholics Anonymous (AA), as shown by the associated badge/medallion (XX in Roman for twenty), called "sobriety coin": 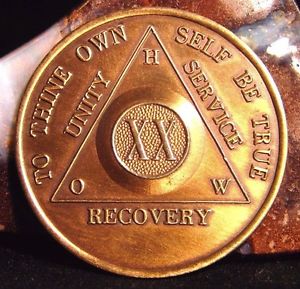 One can celebrate it under the name of soberversary (UD):

To celebrate my tenth soberversary, I am going to run a marathon.

The path is hard:

Early recovery is nothing like being 2, 4, or 8 years sober (source)

So "sober" is not just an adjective: blended with "20 years", it become an event, a period, albeit conceptual. I understand the sentence as: "after having achieved twenty years of sobriety" or "after earning the XXth sobriety coin". In this interpretation, one could talk about the figure of metonymy:

Here, one can consider a '20 years sober' badge, as a three-word metonymy for himself, a 'résumé'.

As for English grammar, the whole expression seems to be called a "substantive phrase", or "noun phrase",

and works as in "after 20 years of war", "after the rain". One very common occurrence of this substantive form is with "married": "twenty years married", an accomplishment with its anniversaries (no other comparison to alcohol). For instance:

Cooper compared it to his rock star image vs the 40 year married , 30 year sober ,born again , youth counseler that he is (source)

For some reason, to me,

In 2006, after 20 years sober, he checked himself into rehab for alcoholism.

In 2006, after 20 years of being sober, he checked himself into rehab for alcoholism.

might sound more fluid. It could just be stylistic.

In 2006, after 20 years sober, he opened up about his struggles with addiction

does sound fine since there is no contrast and "20 years sober", a shortened form of the phrase "after 20 years of being sober", is used for emphasis in a journalistic headline sort of way.

I've just read from A Student's Introduction to English Grammar the other day that an adjective can indeed take a noun phrase as its modifier like :"five year old", "two hours long" , "a bit over powering"

The best room available, the only decision possible, the worst choice imaginable -- as it turns out, postpositive* adjectives happen, even in English.

The phrases above would still make sense with a more conventional word order: the best available room, the only possible decision, the worst imaginable choice.  There are, however, other phrases which only make sense when the modifier is postpositive: the best room available in the city, the only decision possible at this time, the worst choice imaginable under these circumstances.

I'm here to find the people responsible for this mistake.

Just like "available in the city", "possible at this time" and "imaginable under these circumstances", "responsible for this mistake" is naturally postpositive.  The word "responsible" does not modify "people" on its own.  It is part of a larger phrase that as a whole modifies the noun.

after 20 sober years
after 20 years sober

A similar but more subtle shift in meaning occurs here.  "20 sober years" can easily be read as 20 serious years, 20 grave years, 20 dull years, 20 boring years -- the years themselves are inherently, intrinsically sober, and only those senses of the word "sober" that can directly apply to the years make sense.  In the original, it is not the years themselves that were sober.  The man was sober.  He spent those 20 years refusing and avoiding intoxication.

"After 20 years sober" expresses the same general sentiment as "after staying sober for 20 years" or "after 20 years of sobriety**".

**  Because the word "sobriety" exists, there is no need to form "soberness" out of "sober". If "sobriety" didn't exist, "soberness" would be a reasonable formation.

Not the answer you're looking for? Browse other questions tagged prepositions word-usage sentence-structure or ask your own question.