Pupils find "a golden hair tress", but it's jewelry made of gold, not a lock of blond hair?

A quote from The Telegraph:

Many archaeologists spend years digging through dirt just to find one piece of buried treasure.

But it only took a group of lucky schoolboys a single morning to unearth a precious golden hair tress dating back to 2,300BC. 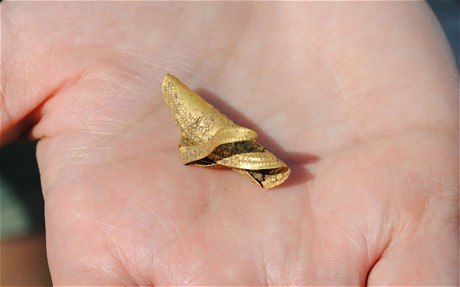 Now, a tress is a lock or a portion of hair. Here's the definition from MW:

Tress: a long lock of hair; especially : the long unbound hair of a woman —usually used in plural

Why then does the newspaper use the term to describe an object made of gold? What dictionary contains a definition of tress as a hair ornament?

Although google seems to mainly throw up exactly this story hundreds of times when looking for hair tress, I found this article:

What the archaeologists did not expect was, as the skeleton was being cleaned in the laboratory, the discovery of a pair of gold hair tresses inside the man’s jaw. The new hair tresses were in the same style as the Archer’s.

Only half a dozen finds of these earrings have ever been made before in Britain, so it was remarkable that the graves of two men with these symbols of power were found side by side.

Surprisingly, from the context of this article, it seems that hair tress does not refer to something worn in the hair, but it's actually an earring, presumably shaped like a tress of hair.

Well, actually, digging on on that page, I found this: 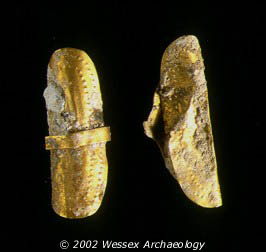 So it seems to be a name (coined by archaeologists?) for a piece of jewellery that may have been worn either on the edge of the ear of on a hair braid. It seems this usage is not common enough to show up in (m)any dictionaries... maybe archaeologists should publish more!

It seems, although I am not certain, that this is an obsolete use of tress. I cannot find this usage in Google scholar or Google books, but I did come across a definition that makes sense in a dictionary of Middle English:

A cord, binding, net, etc. for confining the hair

What the picture shows looks like some kind of binding for hair, made from gold.

I'm not sure why the reporter used tress. It is perhaps a regionalism.