How to interpret 'a friend in need is a friend indeed'?

The Collins Dictionary definition you linked is the one to use here:

People in need do not have enough of essential things such as money, food, or good health.

The phrase makes more sense if you expand it a little bit.

A friend who stays with you when you are in need is a friend indeed. The speaker is the one who is in need, and the person who is still their friend at that time is a true friend.

The antonym of a friend in need would be a fair weather friend - one who is by your side when things are good, but who abandons you as soon as things go awry.

The majority of dictionaries define this saying as, “A friend [to you when you are] in need is a friend indeed.” This proverb is often traced back to the Greek playwright Euripides in the fifth century BCE (“It is in trouble’s hour that the good most clearly show their friendship,” a citation approximately two centuries earlier than the others that have been mentioned in any of the answers or comments so far). The earliest examples of it in English, going back a thousand years, also follow this sense, and this is how most native speakers understand it.

The earliest surviving example of the in need/indeed rhyme might be the anonymous poem Everyman from the late 1400s, which has the dialogue,

“Then be you a good friend at need;”

(This would not be correct grammar in modern English, but it was at the time.)

You should take heed, though, that (as one of the answers says), some native speakers interpret it as saying sarcastically that a friend who is in need will pretend to be a friend. This sentiment has been expressed in various ways for many centuries, too, but reading “a friend indeed” this way is modern. Back in the 1400s, “in deed” unambiguously meant that the friend’s actions matched their words, but “indeed” in modern English can be used as a disparaging intensifier.

Regardless of whether this is etymologically wrong, though, you should be aware that that is how some people will understand it.

There is already considerable debate about the meaning of this saying, as noticed in this resource:

There are various interpretations of the meaning of 'a friend in need is a friend indeed'.

Taken as read, it means that a person becomes more of a friend when they are in need. The cynical view of this is that they become more friendly in order to get something they need from you, so it isn't really saying that they are more of a true friend at all.

Other 'interpretations' of the proverb would seem to be based on the fallacy that the 'friend in need' and the 'friend indeed' are two different people, and often compare the saying to other proverbs that align more to that meaning. This page explains the cynicism in the saying, and likens it to a more closely-matching Latin proverb from the 2nd or 3rd century which translates as "Nothing is there friendlier to a man than a friend in need".

Paraphrasing the proverb, it means

in your hour of need

from A collection of the Letters of James Hervey dated 1760

Shall I beg you to tell Dr.❋❋❋, that his beautiful Visions❋ were by Dodsley the Bookseller put into the Hands of a very pious and ingenious Friend of mine, who proposes an Alteration in the ninth Line of the sixty-ninth Page of the fifth Edition, where he would read Jesus instead of Virtue:

At that important Hour of Need,
Jesus shall prove a Friend indeed.

The excerpt referred to the lines found in Visions by Verse, by Nathaniel Cotton (the elder), printed in 1751: 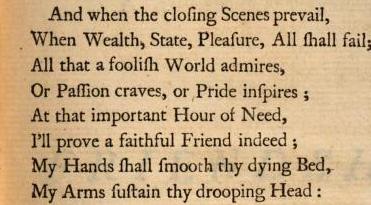 And when the closing Scenes prevail,
When Wealth, State, Pleasure, All shall fail;
All that a foolish World admires
Or Passion craves, or Pride inspires;
At that important Hour of Need,
I'll prove faithful Friend indeed;
My Hands shall smooth thy dying Bed,
My Arms sustain thy drooping Head:
[…]

There is no ambiguity here, friendship is exemplified and exalted in this brief verse

Not the answer you're looking for? Browse other questions tagged meaning-in-context idioms .

7
Ambiguity of the idiom - "A friend in need is a friend indeed."
17
Actual meaning of 'After all'
3
What does "solutions in need of problems" mean?
1
The meaning of "stand down" in this sentence
0
"Bring to light", another usage of it
7
Only means. Why is "means" plural?
0
Is the phrase "Mary is a friend in need" confusing?
4
“run through one's mind”
0
What does the stock phrase "unto itself" mean?
2
What does the idiom "blood out of stone" mean?