Is this place called a barn?

This is a barn:

a large farm building for storing grain or keeping animals in.

In some other countries, we have an area surrounded by simple wooden fences. It may or may not have a simple roof like this: 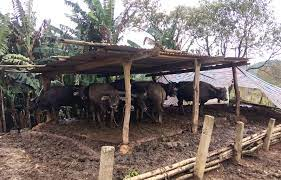 Do we call the one in the picture 2 a barn?

No, your second picture is not a barn, even if it is used for storing animals, and anything without a roof would also not be a barn. The key feature of a barn is that it is a building, like a house, for storing animals and grain. The building part of the definition is specifically a building that protects against the weather: wind, rain, snow, sun, and so forth.

If the building cannot protect from the wind, rain, sun, and snow, it cannot be called a barn. It would need a different name.

As others have said, no, this does not count under the commonly understood definition of a plain "barn" in English.

However, there is something called a pole barn, for which walls are optional, sometimes called a "top-only pole barn" when being sold as a kit for building on-site: 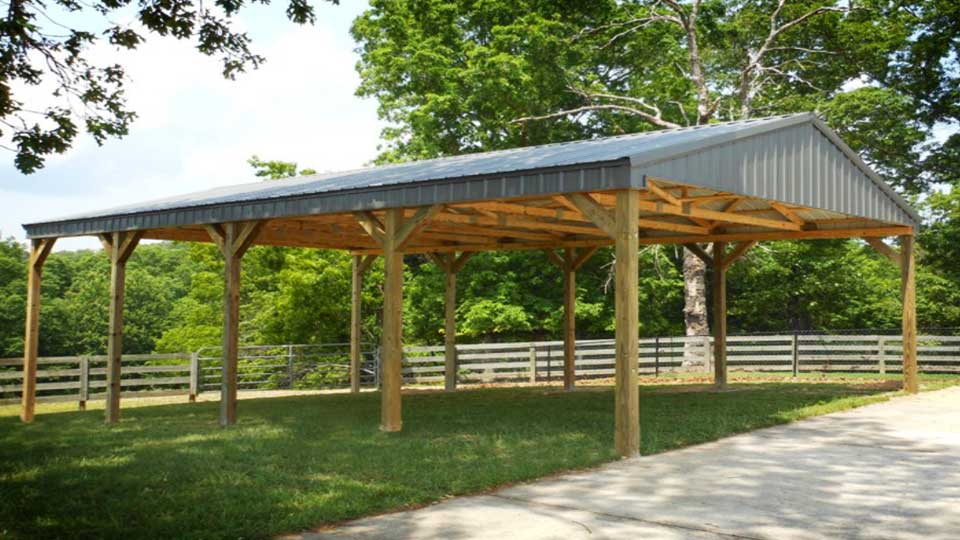 (These types of structures are more commonly known in the US as "carports" when used for storing cars.)

I think you could call the structure in picture 2 a pole barn, albeit a rustic one.

As what RichardWinter has mentioned, this is not a barn at all, and it should be called a "shelter".

The meaning of shelter is:

a place giving temporary protection from bad weather or danger

a shielded or safe condition; protection

In this case your picture fits the second meaning.

In the livestock world, the shelter (roof) would be called a "shed" or "run-in shed". The people who manufacture such things commercially call them "loafing sheds".

A larger fenced area is a pasture (if grassy), field (even if not grassy), or turnout (for horses, probably more commonly used in the eastern US).

Since the roof is optional, call it a "pen"

If it's only used for one type of animal, you can specify: "pig-pen"

Given what it's for, rather than what it's made of or how it's designed, it would be a livestock shade or shade shelter, here are some more high-tech/less sustainable versions: https://www.google.com/search?q=livestock+shade&tbm=isch

To confirm what others have already said, no, it is not a barn.

To add to what others have said. In the U.S. & the U.K. we don't build those regularly enough to have a word for them. You will most likely here us refer to it as shack, or hut, pig-pin, or roof - although none of those nouns I just listed will actually work to describe it.

Its likely that in another area of the world, some distance away from the UK, and the US, they build those (it looks to me like it's created in a rain-forest or jungle). Whatever the word that they use for it, would likely be the correct word to use even in English. Just because a word didn't originate from English speakers, doesn't mean that it isn't the correct word in English. Sometimes the correct word is the word you might already use for it. In such a case, you might have to explain to native-English speakers what something is, because an American, like myself, may not have ever seen anything like it (which is the case here).

Not the answer you're looking for? Browse other questions tagged word-usage meaning word-request .

2
Demanding money for poor countries to take voluntary action
6
What do you call these problems including those can be seen on some knitted clothes?
9
What is the small room in the entrance of the flat called?
3
"Farm policy" or "farming policy"? Is it an AmE/BrE thing?
2
An idiom/expression to imply "rebuilding and beautifying a destroyed area"
0
How to express these actions in English: She is hanging / swinging on the roof of the castle?
1
What are these called? a pillar and a wooden bed?
0
What are the differences between cake and other bakery products?
1
Is "UHT milk" called "boxed milk" or "long life milk" or "shelf stable milk"?
0
pastured chicken?