What is the very thick liquid called when we braise meat in coconut milk? 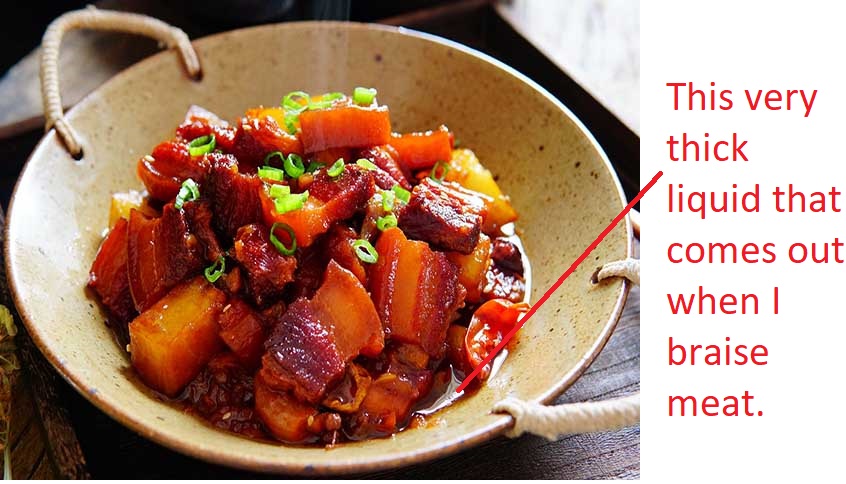 I dice meat, then cook it in coconut water in a slow cooker.

We don't have a slow cooker, we can use a pot and cook it slowly for a long time until it boils down and thicken.

The result is some pieces of meat with some very thick liquid.

"Gravy" could be a good word but we often use "gravy" when flour is added to the liquid.

Here, I don't add any flour to the coconut milk.

You might find that there are regional variations to this answer. Generally speaking though, meat juices left in the pan which have been thickened (either by reduction or by adding a thickening agent such as cornflour/cornstarch) are called a gravy. However, meat juices can also be the basis for a sauce (for example a peppercorn sauce or a Diane sauce) which has other additional primary ingredients.

I couldn't really say if there is a particular 'rule' that determines when something ceases to be a gravy and becomes a sauce, but I would expect anything described as a 'gravy' to be predominantly flavoured by the meat, whereas the sauces I mention have distinct flavours from their other ingredients. I'd suggest that your specific example would be considered a sauce by most English speakers. Although the meat has just been cooked in coconut milk as opposed to water or stock, the flavour of the coconut milk would be so dominant, especially after reduction which would make it sweeter, that it would not taste like the meat juices even though they no doubt add richness to it. Most British English speakers like myself would describe dishes from Asian and Indian cuisines as being in a 'sauce', although I'm aware that the 'base sauce' used in Indian cooking before spices are added to make a particular flavour is sometimes called a 'gravy'.

You have a type of stew, and Wikipedia calls the liquid a gravy:

A stew is a combination of solid food ingredients that have been cooked in liquid and served in the resultant gravy.

However it's not common to refer to this liquid directly. For example you would say "Thicken the stew with cornflour" (and not thicken the gravy of the stew).

Its also fine to talk about the "sauce" or the "juices":

If you can't eat any of the meat, at least have a spoonful of the sauce.

The liquid on its own would be considered a 'reduction' but if it's really just the surrounding reduced liquid to a complete dish, then it would just be called a sauce.
Really, reduction is the method, sauce is the resulting product, but 'a reduction' can be a single 'dressing' or part of a larger recipe for a sauce. You could call it a 'reduction sauce'… but I wouldn't unless I was in conversation with another chef.
These terms in Western cooking come from French cuisine, so they don't always translate perfectly to other cuisine types.

I would use the french term Jus, if I was serving this dish I might call it Meat in Coconut Au Jus but I'm not a Chef or French, just an Australian with a poor attempt at a french accent ;)

What Is Au Jus? Au jus, which translates to “with juice,” is a classic French sauce mainly used to boost flavor in roasted meat dishes. It’s somewhere between beef broth and gravy and is surprisingly easy to prepare.

While it is a reduction, there was no specific reduction process (other than to braise the protein), nor was it a complex component of either the preparation or the procedure, so to say it is the "Juice" from the cook seems appropriate.

My kids for instance would ask for me to serve it "With Juice" or "No meat juice this time dad!"

What’s the Difference Between Au Jus and Beef Broth?
Au jus is basically beef broth on steroids. Beef broth is made by simmering bones with mirepoix (typically onion, carrots, and celery) and aromatics (like parsley, thyme, and peppercorns) in water, extracting flavor and body. Then, to make au jus you amp up beef broth by simmering it with drippings from roast beef (double beef flavor!) or, here in our recipe, thyme, mustard, and Worcestershire.

Au Jus Versus Gravy
Both gravy and au jus start with drippings from roasted meat and broth, however au jus’s consistency is much thinner and more broth-like than gravy because it typically does not use a thickener.

I think the terms Sauce and Gravy are precluded in this instance as no specific thickener was added, but I love this reference that suggests Jus can still be thickened:

...if you prefer a slightly thicker au jus, just add a tablespoon of flour with the butter and cook, stirring about 1 minute to lightly toast the flour before whisking in the broth. Too much flour and you’ll go to gravy town, so it’s better to use just a little.

All these quotes are from https://www.thekitchn.com/au-jus-recipe-23235434

Recognising this is an English Language focused question, in the cooking domain it is widely accepted in many languages and cultures to use the native term for a technique or product from the culture that it originates, rather than trying to approximate that term using specifically local words. In general, many French terms are considered parts of the common English Cooking vernacular, Jus would easily be up there featuring on many menus printed in english for many different cuisines.

0
What is it called when we 'indirectly' tell something to someone?
4
Instruction while drinking milk - Don't spill the milk; what about solid food?
4
Terms for manner in which the liquid is consumed from a bottle
4
What is the dietary term for someone who eats meat but not eggs or milk?
0
Is it okay to say "the piece" when you don't know what it is called?
1
What is the underside of the bed called?
0
What is the dish of meat or fish cooked in very little liquid like soy source until the meat/fish becomes sticky?