I diced pork as shown in this picture 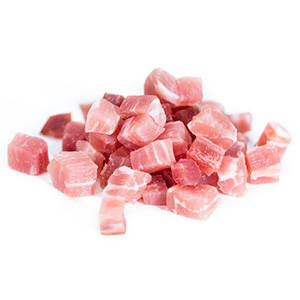 Then I put them into a pot and then put some cooking oil in OR very little water in. Then, I cook it slowly in low temperature in the covered pot for a long time.

The verb "stew" (to cook something slowly, or allow something to cook slowly, in liquid in a closed dish) might be the right one too.

But it seems that we use more liquid when we stew than "braise". So "braise" is the better one.

However, I have a problem here.

Braising involves cooking large pieces of meat or chicken partially covered in liquid, while stewing uses smaller pieces of meat totally immersed in liquid. The liquid will usually be a combination of stock and water.

But my pieces of meat are quite small as showed in the above picture.

My cooking meets the "low liquid" condition of "braise" but does not meet its "big pieces of meat" condition.

Also, My cooking meets the "small pieces of meat" condition of "stew" but does not meet its "more liquid" condition.

According to Google's dictionary, the crucial distinction is whether the food is fried before being cooked further: To stew something is "to cook [it] slowly in liquid in a closed dish or pan," while to braise something is "to fry [it] lightly and then stew it slowly in a closed container." Many other dictionaries also specify that braising involves using a relatively small amount of liquid, and that is generally how I have understood the term as well.

In my experience, there's actually considerable overlap between the two words. A recipe that calls for browning some of the ingredients in oil before cooking them might still use the verb "stew" rather than "braise," and a recipe that doesn't call for any sautéing or frying might use the verb "braise." I'd say the word "braise" is especially likely to be used if 1) the dish involves a relatively small amount of liquid with relatively concentrated flavors; 2) wine is a major component of the cooking liquid; or 3) the main ingredient is not fully immersed in the cooking liquid and is therefore cooked mainly by the steam the liquid releases.

In the case you're describing that involves using some water, I think either term would be acceptable, but "braise" would be the better choice. (There's a Japanese dish called kakuni that involves preparing cubed pork belly in a manner somewhat similar to the one you've described. When the New York Times recently featured a recipe for this dish, they called it "braised pork belly.")

However, we wouldn't be likely to use "stew" or "braise" to refer to the method used in the oil-only version of your dish. That one sounds like it might be a variety of confit, or of poaching in oil.