When, How and the Importance of Verb Shifting

Can anyone please explain to me the concept of verb shifting? And if possible, please give an example where the story is based in the past, and has suddenly changed tenses. Cheers ! Here is an extract of a text I would like to know about.

They were lucky enough to have escaped the clutches of the Giant. However, they had suffered a tremendous loss. Their resources were reduced to ashes and now, they have just lost their leader. Without their leader, they were nothing.

Ok, so Im trying to imply that this short story is based in the past, is the phrase 'have just' correct? If it is, why?

Yes, this is an example of verb tense shifting. This is because in the middle of our paragraph told in the past, we are suddenly confronted with a present perfect (have just). This is an incorrect use, since we are talking about the same timeframe as the rest of the paragraph. It should be "had just".*

Verb tenses demand some consistency; a story in the past should likely be entirely in the past. The future in the future and so on.

Often, it seems verb tense shifting refers to the erroneous act of conjugating a verb in an inappropriate tense. Here is one such example: 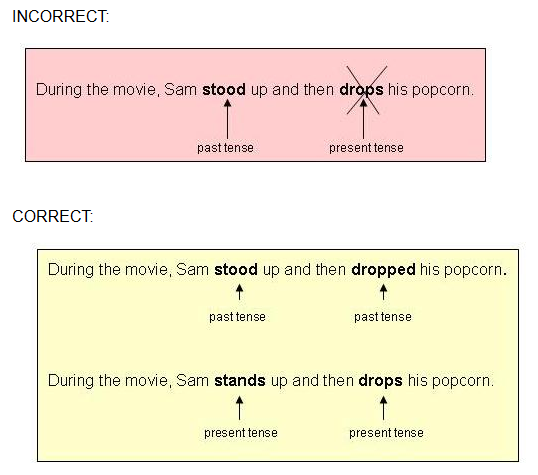 Often, of course, it is legitimate to use a variety of tenses in a single paragraph, or even a sentence. The important factor, is that they are appropriate tenses.

Yesterday, I was eating the cake which I had made the day before, when I dropped a big chunk on the floor.

The above example shows usage of a variety of past tenses, appropriately used to describe the action they pertain to.

It is also common to see past and present (and other combinations) used together. Consider:

The children are playing in the tree house they built themselves.

In short, one's use of tenses must be consistent with the time reference and other verb tenses around it. This article has some very nice examples.

Not the answer you're looking for? Browse other questions tagged grammar verbs or ask your own question.

2
When and how to use *Have* as an auxiliary verb?
0
How to use the verb 'Remember'
2
Past continuous vs. Past perfect
0
I have a problem with the past tense narrative
0
How does change to the “verb” works?
2
omitting “for” when using the verb “wish”
0
Confused about the usage of present perfect tense
0
How to use the verb give and the verb make?