Is this BBC article ambiguous, or am I interpreting it incorrectly?

I came across a BBC article titled Ten laws that India should scrap. In the section about salt taxes, it first states:

and follows this with:

A High Level Salt Enquiry Committee set up in 1978 recommended that the tax should be scrapped since the "annual collection was very small" while the total cost of collecting it was more than half of the total collection.

EDIT: I'm including the relevant part of the article here as a screenshot, as well as an Internet Archive copy of the BBC article. 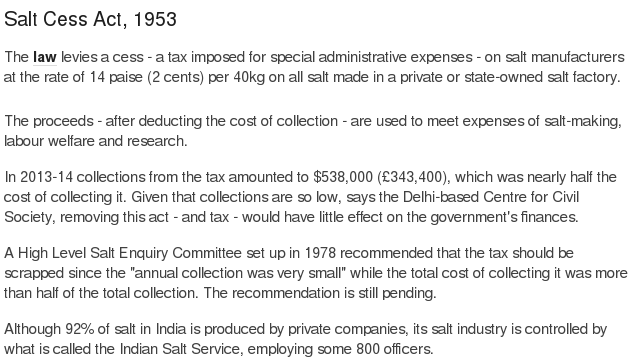 Most cesses are ineffective, expensive, rarely serve the purpose they were levied for, and, generate insignificant amounts in revenue. The salt cess is one such example, generating Rs3.3 crore in the last financial year. The cost of collection was Rs1.5 crore.

If we convert those numbers to US dollars for comparison, we get $538,000 collected and $245,000 spent collecting that money. So the first sentence contains a mistake:

The cost of collecting was nearly half of what they collected, not the other way around.

They do say the opposite things, but there is a changing time frame involved.

The first quote says that in 2013-2014, the revenue from the tax was half the cost of collecting it.

The second quote says that in 1978, the cost of collecting the tax was half the revenue from the tax.

Clearly in the intervening 35 years the cost has gone up much faster than the revenue.

(Of course it's also possible that the writer or editor screwed up, but it does make sense as written.)

The first sentence implies that the cost of collecting the tax was more than double the revenue collected.

These kinds of sloppy errors are not rare because the phrases seem to take on a life of their own. There was a TV commercial here a few years ago, advertising tours to Italy, that said "each place we visit will be more exciting than the next".

Not the answer you're looking for? Browse other questions tagged ambiguity interpretation or ask your own question.