“Start a day” versus “start the day”

When you talk about any day in general, which article would you prefer in the expression "start a/the day."

Can you please explain the logic behind your choice?

I searched for some context in the Corpus of Contemporary American English, where the phrase seems to mean any day in general (at least, as it seems to me), but the article usage is different. All in all, the seems to prevail.

When she rouses me out of a dead sleep in the morning with soft kisses and she acts all playful and cuddly. I can't get enough of that. It's my favorite way to start a day.

I often start the day by puttering--watering the garden, sweeping my studio floor, putting on some inspiring music.

There's no logic for deciding whether to use "to start a day" versus "to start the day" in this case, just a personal choice. It's strictly a style preference that has no effect on the meaning in most cases: any day in general. This is different from the idiomatic American English "I went to the hospital", which is much more common than "I went to a hospital".

The effect that it has on style in this sentence is minimal because both sentences are the same length, and the two words sound almost the same. OTOH, maybe I'd be more inclined to use the day if I were talking particularly about today rather than every day in general. Thinking a little more about the two phrases, I believe that I prefer the sound of the day, but I'm sure that it's a personal and idiosyncratic preference rather than a logical preference.

Let's start the day with an Ngram (which seldom tells the whole story, but is often a good place to start):

As you also observed, both versions are found, but start the day seems to be much more predominant and idiomatic.

What is more telling, though, is that many instances of start a day seem to be purely coincidental, as part of phrases like start a day care center or start a day or so later, which is really a different context altogether: 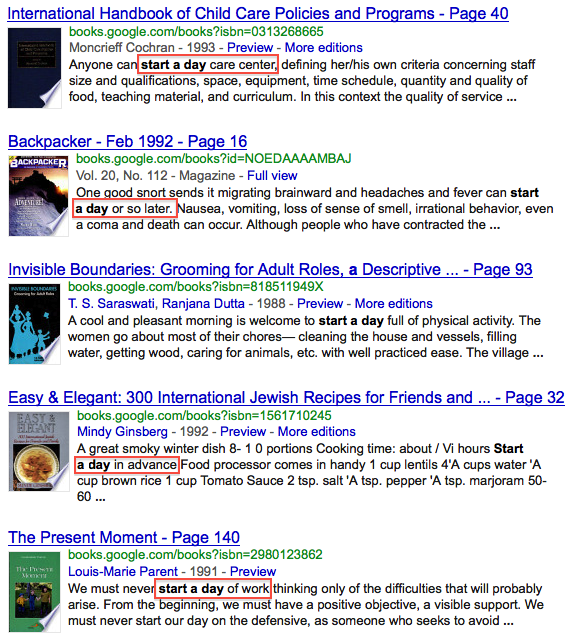 You did manage to find an instance where the could have been used instead of a:

It's my favorite way to start a day.

In fact, I'd say the author could have changed a to the in that context and the meaning would remain pretty much the same:

It's my favorite way to start the day.

It sounds like her favorite thing to do in the morning is putter around – but isn't that true for a lot of us?

My point, though, is that, in that context, the widespread idiomatic use of the phrase start the day lets you change the article without changing the meaning.