Which definition of 'bide' in 'bide time'?

1. How do you determine/deduce the apt meaning / definition (de novo) ? Please explain the steps, thought processes; I’d like to try to resolve this myself in the future?

2. http://www.thefreedictionary.com/bide+time does contain '2a. To wait; tarry.' But is 'wait' the right choice?

3. What about Definition 2b? 'To stay in time' makes sense?

4. Or definition 1? 'To remain' in time makes sense also?

In re: your questions 2 through 4, first note that "biding one's time" is an idiom, and there is no guarantee the meaning of an idiom can be deduced from its component words, and in general no good way to identify an idiom from its form (i.e. to even know you're dealing with an idiom in the first place).

That said, from the very link you provided: 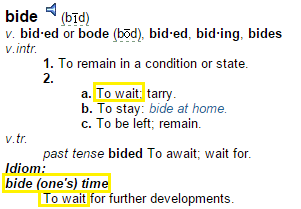 In the general case:

He was biding his time, waiting for his ship to come in.

Jack was patient. Where other men would get frustrated and give up, he bided his time.

or by singing a hymn:

Abide with me; fast falls the eventide;

The darkness deepens; Lord, with me abide;

When other helpers fail and comforts flee,

Help of the helpless, oh, abide with me.

So I would expect many people to learn the meaning of "bide" from an implicit definition given near a usage of "bide one's time'.