According to definitions 1 and 6 for "point" in this dictionary:

def 1: a single fact, idea, or opinion that is part of an argument or discussion
def 6: a particular quality or feature that something or someone has

The definitions include the following example sentences:

it seems there is no way to determine which definition of "point" to use here. Am I wrong?

This, unfortunately, isn't anything I'd expect an American-English speaker to say. You have to discuss the finer points of something. (It's probably a stock phrase that just can't be broken, but it's midnight and I'm running on low sleep, so I hope someone else will come in and be more correct.)

I also wouldn't call "finer points" equal to "small details." Often it would be better defined as "more precise details." If you talk about the finer points of winemaking, you aren't talking about trivia (which is what "small details" may often be translated as, because of "minor details" being a stock phrase to wave off criticisms[1]) -- you're talking about the precise detail of winemaking, which can encompass both subtle effects and tricks of the trade which aren't actually "small."

Therefore, you'll always be able to pick out the definition of "finer points" because it must have context as to which topic's finer points are being discussed. Even if someone is making a play on words -- "discussing the finer points of arrow making" -- there will be context for the pun. (Just about the only time you could see "discussing the finer points" alone is if a writer is straining to make a joke about the idiom, while having the context be "talking about sharp, pointy things" -- literal "fine, finer, and finest points.")

def 1 sentence: They spent the evening discussing the finer points of (=the small details of) world politics.

the points are ideas (opinions) about world politics. It probably will not include much factual information.

Def. 1, labeled IDEA agrees with this.

def 6 sentence: They would spend hours discussing the finer points (=small details about qualities and features) of various cars.

the points are related to qualities (like performance) and features (like equipment or option) that would be factual in nature.

Def. 6, labeled QUALITY/FEATURE agrees with this.

NOTE: Having said this, I am not familiar with the linked reference or its accuracy, and it would be adviseable to consult with other references for supporting information.

Note: This started as a comment. It's morphing into an answer. :)

I think some people may be getting hung up on your ambiguous sentence example. That's not really an issue, right? I mean, it's obvious that one can construct ambiguous sentences, and I think you know this, but that's not what you're really asking. I think you're stumbling because you don't fully understand your own question. That is, you're formulating the question wrong because you are confused.

I think (you can confirm) you were using the ambiguous sentence to try to illustrate your main point (DEF1) which is that the Logman dictionary is confusing when it supplies nearly identical sentences to different meanings. I think you are right that the dictionary is not helping to distinguish the finer points (DEF6) of the definition of point. Furthermore, the dictionary might be misleading.

Here's another way of looking at it. Suppose I have two sentences:

In the above two sentences, different denotations of point can clearly be identified.

But given the two example sentences that you indicated, it's difficult to see how one is a different denotation than the other. If there's some distinction for finer points of world politics and finer points of various cars it escapes me. Sure, one is about "politics" (which is ideas) and the other is about "cars" (which is concrete). But it would be a use-mention error to ascribe a denotation to point based on the topic of discussion. One can surely make points (DEF1) about cars, politics, and anything else. I would be happy putting both sentences under DEF6.

The following is an extract for DEF1 and DEF2 from Logman Dictionary online. 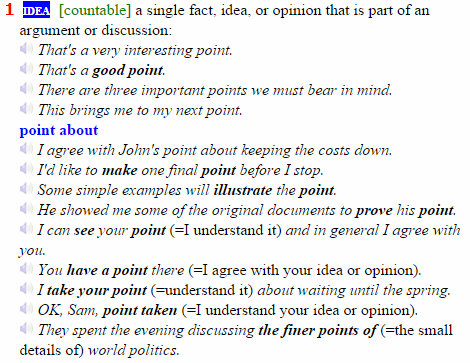 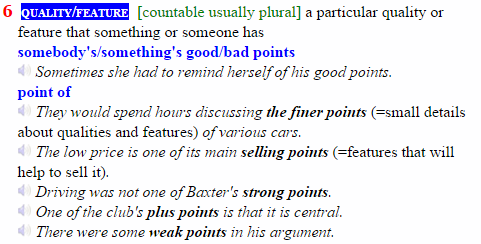 Both definitions contain the same sentence:

"The finer points" is not ambiguous about which sense of "points" is intended, because it's a recognizable fixed phrase. People understand that it means the smaller, more subtle aspects of some topic. "Finer" is meant in its sense of the opposite of "coarser". "Point" is meant in its sense of "proposition" or "small, specific matter for consideration or discussion" (your definition #1) as well as "specific aspect of something" (like your definition #6). The distinction between those definitions is, shall we say, too fine a point to matter in places where this phrase is used.

However, if you say this:

there must be some preceding context to indicate what topic the finer points pertain to, otherwise your listener won't know what you're talking about. You're likely to get a response like, "The finer points of what?"

They spent hours discussing the finer points of woodworking.

And this is also clear:

Jamie taught a class on woodworking. Her students were fascinated and stayed after the class to ask a lot of detailed questions. They spent hours discussing the finer points.

This is clear only because the preceding sentences suggest that you mean the finer points of woodworking.

The full, recognizable fixed phrase is "the finer points of topic." Take a look at this Google Books search to see how the phrase is commonly used.

Not the answer you're looking for? Browse other questions tagged meaning-in-context usage ambiguity .

4
"How long was spent on the job?" - a grammatical parse of its subject

12
Meaning of "(assessing) points to nowhere"
1
Is there a better way than the other when it comes to denote having certain features or qualities?
5
What is the meaning of “they are out of hit points”?
3
Avoid clichés when enumerating points or topics
1
Could anybody explain basketball terms on points?
9
What is the meaning of "notice to quit at once" and "Lotty points”
1
What does the second 'intelligence' mean/imply in the sentence of "An intelligence organization that fears intelligence?”
0
What does "Three points" mean?
0
What does "score points" mean here?