The ease with which a fish can reverse the effect of the sidedness of its eye asymmetry simply by turning around has caused biologists to study internal anatomy, especially the optic nerves, for the answer.

Would you please in a readily way throw a light on the bold part?

Any help would be appreciated

Source of the fish example

The original source of the line in question is talking about flatfish, and the 'eye assymetry' is the placement of both of the fish's eyes on the same side of its head (instead of the symmetrical, one-eye-on-each-side arrangement of most animals).

The 'effect of the sidedness of its eye asymmetry' is therefore the fact that it can only see things on one side of its body - on the right if both eyes are on the right side, or the left if both are on the left side. 'Reversing the effect ... by turning around' simply means that a left-eyed fish lying on its right side should see exactly the same thing as a right-eyed fish lying on its left side. 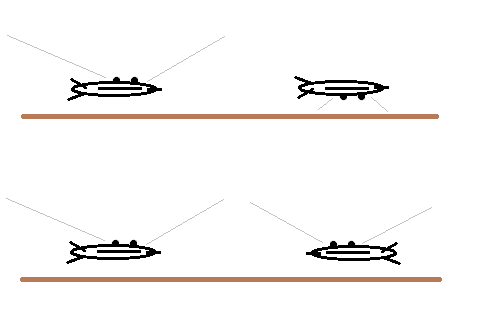 On the left is a flatfish with eyes on the left side, lying on its right side on the seabed. On the right is a flatfish with eyes on the right side in two different positions. The version on top is shown lying on its right side, exactly the same as the fish on the left, to demonstrate the asymmetry. The version below it has rolled over to lie on its left side, and in doing so reversed the effect of the asymmetry - it can now see the ocean above it, just like the left-eyed fish, instead of burying its eyes in the mud.

That is, the sentence is claiming that it shouldn't make any difference whether the fish's eyes are on the right or the left side, because all it has to do is roll over and it will get the same effect as a fish with eyes on the other side of it's head would have had without rolling over.

(The reason this is significant is because starry flounder living hear Japan are almost all left-eyed - despite the fact that those by the US are split half-and-half - which indicates that it is having an effect. The question is what, since it can't be to do with looking at the environment around it...)

If X reverses the effect of Y's Z, it means:

The ease with which a fish can reverse the effect of the sidedness of its eye asymmetry simply by turning around has caused biologists to study internal anatomy, especially the optic nerves, for the answer.

Not the answer you're looking for? Browse other questions tagged vocabulary phrase-usage or ask your own question.

2
Appropriate phrase for the expression “get something made”
1
laying the ground for some Budget back downs
8
I need some new “clothes” for the summer
9
Be (all) the better for something
5
Difference between 'it fits something' and 'it is fit for something' — “The key fits the lock” vs. “The key is fit for the lock”
2
I need some formal ways of saying, “some people were responsible for the failure”
0
A synonym for “take a small amount of something”
2
What's the best synonym for “in other words”?
0
Looking for an easy word that means “the person on behalf of which something is done”
1
How can I say that something happens not for the first time?