What exactly is being "obnoxious"?

I have come across this word quite many times, and can only understood vaguely. I think it means unpleasant and aggressive. When I looked the word up in the dictionary, I didn't get much help. Macmillan defines it as:

With such vague definnitions, it is not easy to "grasp" the meaning of this word just from reading the dictionaries. I would like some expertise from people who speak English on a daily basis. I'm trying to figure out, for example, what do these phrases mean? Do they sound natural to a native speaker:

"I was acting obnoxiously."

When exactly do you use obnoxious to describe something? Does it have a feel of hatefulness towards the subject?

is almost correct, but as commonly used, obnoxious also implies that the offensiveness is difficult to ignore. An obnoxious child is not just rude, but loudly or aggressively so. An obnoxious color or combination of colors is unpleasant but also intense or bright like the way the building in the linked article was painted: 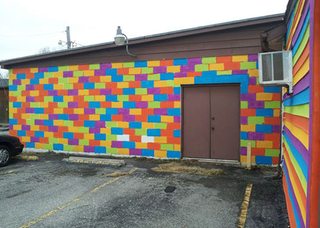 I would rewrite the definition as

obnoxious (adj.) very rude, offensive, or unpleasant in a way that is difficult to ignore: an obnoxious child; an obnoxious habit

I don't know if I feel hatefulness toward an obnoxious person - I think it's too strong a word. I would describe it as strong dislike mixed with annoyance.

My impression is that the word obnoxious usually refers to behavior that is loud, rude, impolite, or rambunctious. I wouldn't consider a dinosaur obnoxious, but I might talk about obnoxious football fans, an obnoxious and pushy salesman, or an obnoxious patron at the library whose boisterous laugh keeps making it hard for others to concentrate.

I can see why this would be a tricky word to understand. Most dictionary definitions are terse and broad: for example, Collins says little more than "extremely unpleasant"; CDO says, "very unpleasant or rude"; Macmillan says "very rude, offensive, or unpleasant." My Mac's on-board thesaurus lists a plethora of synonyms, many of which I don't think align very well with the gist of obnoxious:

I did some research on the word, and didn't find much that would help put the word's use into focus. In the 1800s, the word was often used to describe unpopular laws. Gandhi wrote, "We have already examined the various reasons why we ought not to submit to the obnoxious law." However, I think contemporary English would favor a word like outrageous over obnoxious when talking about unjust laws.

As for your question ("Does it convey a feeling of hatefulness?"), I'd be inclined to say it expresses a strong feeling of annoyance, but not necessarily hatefulness – at least that's my perception of modern usage.

Someone who unpleasantly just verbally unloads their thoughts without any filter, or with little respect for the give and take that characterises most conversations. I think it is different from a 'straight talker' or someone who is honest. In the movie 'When Harry met Sally' the latter calls the former obnoxious, and I think that is a good example.

Maybe some people use the Latin word obnoxious when they want to say they find someone disgusting. Some people just like to use academic words. But as etymonline says, the word originally had a different meaning. And the Latin word elements actually have nothing to do with the idea of disgusting. Latin ob- means against and the element nox comes from nocere meaning to do damage or to harm.

So I would avoid using such a queer academic word in normal everyday situations.