“I can cook,” said Sophie. “Unhook that frying pan and I’ll show you.”
“She reached for the large black pan hanging on the closet wall, in spite of Michael trying to prevent her. “You don’t understand,” Michael said. “It’s Calcifer, the fire demon. He won’t bend down his head to be cooked on for anyone but Howl.”
Sophie turned and looked at the fire demon. He flickered back at her wickedly. “I refuse to be exploited,” he said. (Howl’s Moving Castle, by Diana Wynne Jones)

To cook something on something: They cooked fish on a grill.

To sit on something: He sat on a chair.

To be sat on: The chair is designed to be sat on.

Why are you scraping off loose paint with a dinner fork? A dinner fork is meant to be eaten with.

I would like to be in the school play, but I would prefer to have a speaking role! I don't want to bend over on all fours, to be sat on, as if I were a sofa!

First, I have read this book and 'bend down his head' is meant literally. Calcifer is a living fire who can be used as a stove, but only if he puts his head in the right position first.

Second, the phrase "He won't bend down his head to be cooked on."

When we cook using a fire or stove or similar, we say that we cook on it rather than with it.

"Sophie cooks on the stove."

Now convert that to the passive voice.

"Sophie cooks on the stove." - Active

"The stove is cooked on." - Passive

We use this phrase to make a passive infinitive verb: 'to be cooked on'. The preposition 'on' stays with the verb.

"He refuses to be cooked on."

"He won't bend down his head to be cooked on."

Imagine that there was another demon who could turn into household objects.

"Sophie sits on the chair."

This one might be clearer. You can't sit a chair. You can only sit on a chair. So the passive infinitive verb is 'to be sat on'. They want a chair to sit on.

"Sophie cleans with the broom."

"The broom is cleaned with."

"He won't turn into a broom to be cleaned with."

You can clean a broom if it's dirty, but you can also clean with a broom, if the floor is dirty. So using 'to be cleaned with' instead of 'to be cleaned' means that they want to use the broom for cleaning, not to clean the broom.

I'm not familiar with the book, but clearly the fire-demon is a source of heat; and is not consenting to be used in this way by just anyone; presumably the mechanism of deriving heat involves him bending his head down (to a height suitable for cooking) and the frying pan goes on top... So the fire-demon is not the subject of the cooking, but the source. The cooking goes on the demon in the same way a hat goes on a head.

The sentence is clearer when you picture the character involved. This is how Calcifer (the fire demon) was imagined in Hayao Miyazaki's interpretation of Howl's Moving Castle:

However, as the book describes the fire demon as having to "bend over", perhaps the author imagined something more like Hades from the Disney movie Hercules: 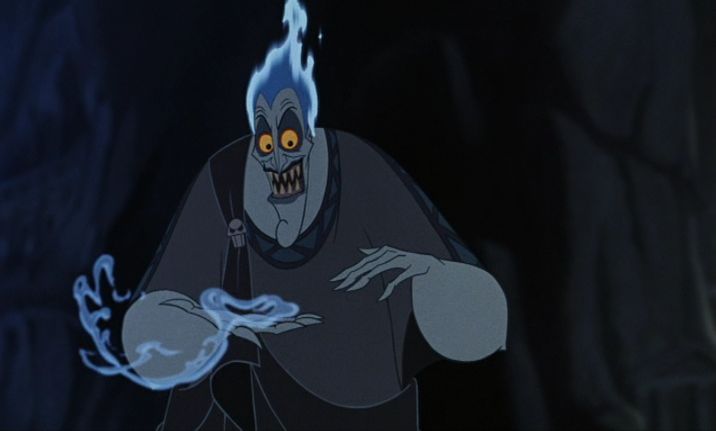 In order for someone to cook food using the flame on Hades' head, he would have to literally bend over; he would need to bend down his head so they can cook food on his head.

However, he refuses to do this; he "won’t bend down his head [so that it can be] cooked on".

First and foremost, "bend your mind to something" means to give all your energy or attention to one activity, plan etc.
So, this [mysterious] Calcifer will not accept and perhaps try to be cooked on for anyone's sake but [more mysterious] Howl.
For the second part of the question, I should mention that "to be cooked on" here means something get cooked on that. It seems Calcifer can work as a stove!

Not the answer you're looking for? Browse other questions tagged meaning-in-context parsing to-infinitive adjuncts .

2
What is the noun phrase whose head is "China"?
4
The car crashed into a bend -- meaning?
3
Meaning of verb "cock" in "He cocked his head to the side."
2
What does the phrase "head down the rat's hole" mean here?
0
"his eyes swam in his head"?
1
Is the sentence "The fire sent everybody running out of the cinema" correct?