The word “would” usage in present time 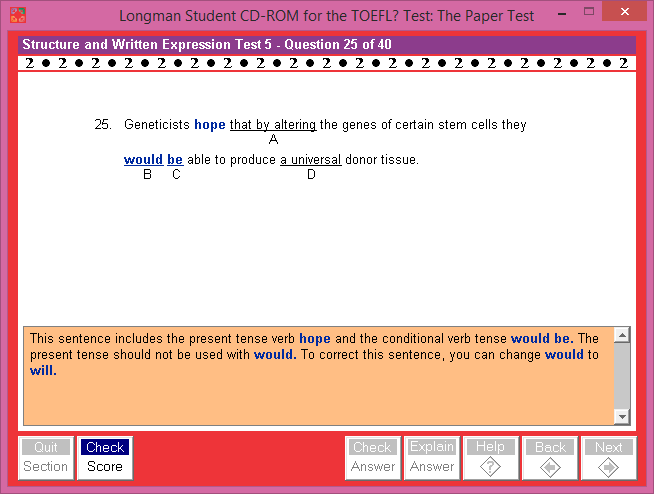 From the picture above, I think the use of would in the sentence is correct because would could also be used to express uncertainty, opinion, and hope.

5. Expressing a conjecture, opinion, or hope:

So, is it okay to use would in that sentence? If not, why?

I think the study guide is wrong and the dictionary you cited is correct: would can be used in the present tense.

I had hoped that we would be home now.

You wouldn't be thinking of asking her on a date, would you? [present continuous!]

Would you please stop making that noise right now?

The same dictionary entry includes yet more examples of present-tense would.

The example sentence from the CD-ROM actually isn't completely incorrect, as they claim, although normally one would say will be. (I just used would in the present tense again!) Saying would be as in the example expresses less confidence than saying will be. The normal level of confidence for a hope about scientific experiment is expressed by will be.

I recently posted some more about how would differs from will here. I'm sorry it's rather vague and not a rule, and my explanation makes no attempt to be complete, but I think this vagueness is an important part of the language. It's hard to explain the meanings of modal verbs completely because they carry multiple, simultaneous meanings, which can clash with one's intended meaning in an endless number of ways, requiring some odd, inventive solution. For example, you couldn't say I had hoped that we will be home now because will suggests the future while would suggests the past as well as counterfactual imagination. The hope is past and the hoped-for situation is now, so would wins the clash. There is no limit to how many ways these clashes can happen, and there is no simple pattern to the ways people customarily resolve them in different circumstances, so it's very hard for rules to capture the language completely.

For the TOEFL, though, you might be wise to ignore the way the language is really spoken and written and go with the rules they tell you. When people write examinations, they are forced, to some degree, to test knowledge of rules and to ignore subtleties, vague distinctions, and the real flexibility of the language. Considering those things would make the questions too hard to grade.

In my opinion the image’s author wants to correct this sentence by correcting its meaning, and not its grammaticality.

Actually the sentence is grammatically correct as it is but the word would implies the conditional, that is a possibility or likelihood.

No doubt, the author wants to express a certainty in future which is why they say to correct this sentence.

Not the answer you're looking for? Browse other questions tagged grammar tense modal-verbs or ask your own question.

3
What is the usage of these “would”?
1
My question is whether I can just use simple present tense for different personal pronouns when I give orders
0
Use of would for “vagueness”
1
“I would think” vs “I would have thought”
1
Usage of the subjunctive word “would”
3
With or without “would”, what's the difference?
0
Which one would be grammatically correct?
0
The difference between have done + will or would
0
“But the idea that someone might be arming the Seam would never have been allowed” — why “would have”?
0
What is the difference between “I am not agree” and “I do not agree”?