How do you read these mathematical expressions aloud?

(both above are from Wikipedia.org)

If it is clear that i and n are one-indexed, then "the sum from i equals one through i equals n" can be replaced by "the sum of the first n terms". "The width of each i" is an interpretation of "delta i".

Here's how I'd say the first one:

The absolute value of S minus the sum from 1 to n of f of t sub i times delta sub i is less than epsilon. 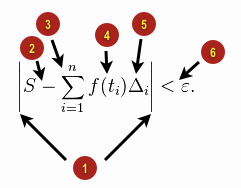 Note: Some mathematical expressions can be read aloud in more than one way. For example, someone might say:

Absolute value of s minus sum i equals one to n, of f of t i times delta i, is less than epsilon.

Please note that this is a casual reading. It's practically impossible to avoid ambiguity when reading mathematical expressions aloud. We might try to add more words such as "left parenthesis", "right parenthesis", and so on, but that wouldn't help much. There are several possible alternatives, but this is how I normally read them.

The simple answer is "you don't". Complex mathematical expressions like those become ambiguous when read out loud because you lose a lot of the structure. If you ever need to communicate the expression exactly, you'd write it down and point to it.

The only exception I can think of is if you were dictating something over the telephone, for example because you were working on a paper with somebody and you were trying to point out a mistake. Then, you'd read out literally every symbol. (Or just the part with the mistake, e.g., "The sum should be from i equals 0 to n minus 1, not 1 to n.")

As a mathematician, a physicist and a uni lecturer, I would read the two expressions above as follows:

At a class, you point to the relevant positions of the expressions while you read them. Note that clarity and simplicity in statements are important in teaching.

Not the answer you're looking for? Browse other questions tagged mathematics reading-aloud .