meaning of “tab him”

What does "tab him" mean in the animated TV series Dastardly and Muttley? 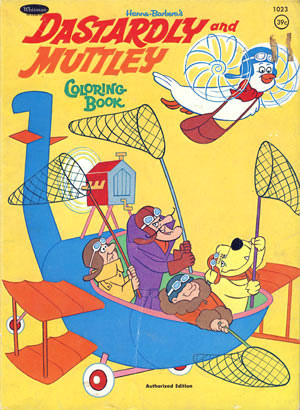 I think I knew the answer! Even though I am not given to posting answers, I am forced to post one after taking sometime to prepare the question.

It sounds as if Dastardly doesn't mind that pigeon gets hit and stuck to a wall for example.

Mark or identify with a projecting piece of material:

His copy of The Diviners was meticulously tabbed and flagged and he had a thick file of all of the emails that the two men had exchanged with each other before this evening.

It sounds to me like the writer of the song chose a random word that rhymed and might vaguely fit in the situation (you could imagine that it means something like 'mark' or 'tag'). However, it's not meant to have any particular or specific meaning.

0
image of “tab” that is not browser's function
2
mimes (meaning)
2
Meaning of verb “nose” in “Georgie wanted to pull him over the breakfast bar and nose at his cheeks.”
1
Meaning of 'light' in “ … and the LORD hath made to light on him the iniquity of us all.”
1
that helping him
2
What is the meaning of ‘take him in’ in the following paragraph?
0
If you know a man's name, can you still call him “sir”?
0
“What are you going to get him?” and “ What are you going to give him?”
2
'blibbering' meaning?
0
The meaning of “floored” in: “he was floored when they told him he was 'going viral'”