What does "tiger" mean when applied to a person (profession)?

I've trouble with this passage from Sketches by Boz by Charles Dickens (The Great Wingleburry Duel):

‘That’s the young Nobleman,’ replied the lady, with a great stress on the last word. ‘Dear Lord Peter is considerably afraid of the resentment of his family; and we have therefore thought it better to make the match a stolen one. He left town, to avoid suspicion, on a visit to his friend, the Honourable Augustus Flair, whose seat, as you know, is about thirty miles from this, accompanied only by his favourite tiger. We arranged that I should come here alone in the London coach; and that he, leaving his tiger and cab behind him, should come on, and arrive here as soon as possible this afternoon.’

What does "tiger" mean here?

From the context it appears to be one of the lord's servants. But I didn't find a meaning like that in dictionary or wikipedia.

I've found the translation of the aforementioned sketch: "tiger" was translated as groom. That makes me wonder what's the etymology here?

6. A smartly-liveried boy acting as groom or footman; formerly often provided with standing-room on a small platform behind the carriage, and a strap to hold on by; less strictly, an outdoor boy-servant. slang. obsolescent.

The citations given here suggest that the term became current about 1817. OED offers no speculation about why the term was adopted. My guess is that it reflects the very colorful liveries which were popular in the 19th century. Livery is the formal uniform which wealthy people used to require their servants to wear. Livery was always markedly different from ordinary dress—you don't want your servants to be mistaken for your peers! As a form of 'conspicuous consumption' it was usually patterned on the formal dress of an earlier period and executed in bright, eye-catching colors, which contrasted particularly in the 19th century with the sober colors preferred by gentlemen. Here is an example of the livery worn by Queen Victoria's coachmen; note the powerful stripe effect: 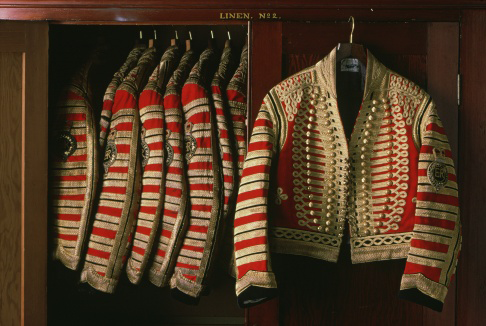 @Stephie notes a source which reports that “The tiger wore an orange and black striped waistcoat which is what gave them their ‘title’.” It may very well be that the first footboy to be called a tiger wore such a waistcoat, and even that such a waistcoat was at some point the 'default' dress for footboys, just as green-and-black stripes were common for table-servants in the early 20th century. But I have been unable to find a contemporary illustration. It should also be noted that the ancient practice was that liveries were executed in colors specific to the family, so it cannot have been a universal practice.

Not the answer you're looking for? Browse other questions tagged word-meaning translation etymology .