What's the meaning of 'sitting with the low back maximally arched'?

[Source] Sn the other side of the coin, there are some specific things you want to avoid. For one, [Dr Jenny Pynt], the physiotherapist, told me, “avoid chairs that force your upper spine, that part between the shoulder blades, forward. So called Executive chairs often do this.” Basically, you want something that’s supporting your back, not sculpting it. The same goes for the lower region. Another common mistake, Pynt warned, is “sitting with the low back maximally arched. This position compresses the joints in the spine creating pain.”

Despite Dr Pynt's status as a physiotherapist, this article is directed at laypeople, yet the bolded noun phrase confuses me. How do you determine/deduce from the words, the visualisation intended of the bolded mistake? I'd relish a picture to help.

Left image. Lower back is arched "too much" aka "maximally". (But note that the far-right "good posture" is also bad posture because the chair is too tall for her!) 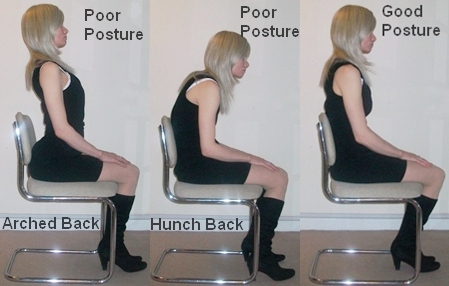