Difference between "How are you doing and How are you"

What is the difference between:

How are you doing?

Do they use in informal speaking or not?

Also, what is the function of the verb 'doing' in that first sentence?

The two are often interchangeable, but they can carry a wide range of meaning.

On the informal side, this "question" might actually be more of a greeting than a question. For example, I might pass a co-worker in the hallway, and say, "How're you doing?" and expect not much more than a nod in return, or maybe a quick "Fine, how are you?" In the latter case, we might be walking past each other as my colleague is speaking, so there's no expectation of an answer from me.

That said, on the other extreme, these questions can also be used to express deep empathy. Another co-worker might tell me that he's lost his mother two days ago, and that he's having to make funeral arrangements. In that case, I might ask him, "How are you doing?" and my mannerisms would be completely different. The words would be spoken more slowly and compassionately; I'd probably be making eye contact, or I might even have a sympathetic hand on his shoulder. I'm essentially asking him, "Is everything okay?" I might even follow it up with something like, "If you need anything from me, just let me know."

In the middle, imagine a group of friends who get together weekly for some activity. In that case, "How are you doing?" might mean, "Do you want to share anything that's going on in your life?" If I have nothing to say, I might respond with a quick, "Good, and you?" but if I have something I want to share, I might launch right in: "Good! We took Elizabeth back to college last weekend. How was your Christmas?"

Lastly – and maybe most importantly – regional/cultural differences may apply, a fact that was brilliantly noted in this funny commercial. By the way, in that YouTube video, I noticed that someone left a comment:

I had to explain this commercial to my friends that aren't from the Northeast.

So, maybe a little explanation is in order here:

So, notice the facial expressions the first two times the Texan starts talking. Everyone is confused, wondering, "Why does he think we've just asked him a question?"

Their facial expressions are even more priceless after the last patron walks in. At 0:24, the bartender tries using a quick hand gesture, as if to say, "Please don't ask that guy next to you how he's doing!" but it's all in vain; the mannerism is just too ingrained. A mere four seconds later, those looks are hilarious, too, as the new customer is bewildered, and the bartender starts wondering how many times he'll have to hear about the big airport in NYC. 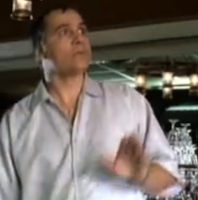 I've lived in both areas of the U.S., and even though I've probably watched this commercial a hundred times, I still laugh heartily every time I see it. It's a wonderful dissection in the nuances of English usage. (I don't think it aired for very long, and I wonder if that's because this "disconnect" still largely exists, so the ad confused more people than it amused.)

Incidentally, nobody is being rude – they are simply unaccustomed to how the expressions are used outside of their respective locales.

As a footnote, I think the Texan believes "the people sure are nice" because everyone is taking the time to ask him how he's doing!

Not too much difference these sentences have; but if we dig deeper, we find a hairline difference between them. Said that, the context matters!

How are you? -typically asks the condition of yours

How are you doing? -typically asks the performance/fortune of yours.

But if you are asking someone's performance, say studies in the exam days...

How are you doing? ~ Yeah, I'm doing great these days. All papers till date have gone great!

We often say that in the context of someone doing great business...

Not the answer you're looking for? Browse other questions tagged difference functions .