Verbs that can be changed into passive contruction?

A transitive verb that expresses an action can be transformed into passive construction. For example, "The boys carried the piano into the house" can be revised into "The piano was carried by the boys into the house". And a transitive verbs that expresses a state cannot be transformed into passive constructions. For example "He has a new car" cannot be revised into "A new car was had by him."

Break into is a transitive verb. This is what the Merriam-Webster Unabridged says. Other dictionaries seem to differ, but in this answer the verb will be used in a transitive sense. 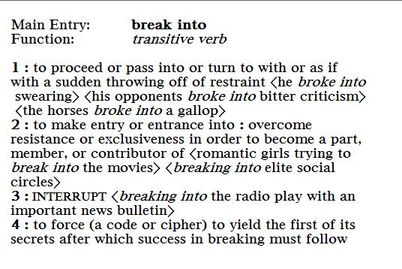 Without an object, the sentence is incomplete and thus ungrammatical:

ungrammatical without an object:
*He broke into.

active:
He broke into the house

passive:
The house was broken into by him.

Note the sense of action or motion or direction (He broke into the house).

Notice that break into cannot always be used in the passive. It is precisely when the verb does not have a sense of motion/action that this is the case.

He broke into a sweat.

*A sweat was broken into by him.

The audience broke into applause.

*Applause was broken into by the audience.

*A gallop was broken into by the horse

Last, another transitive verb, composed of one word, can substutute for break into: burgle. (Note there are no exact synonyms and let's not get into legal definitions.)

Not the answer you're looking for? Browse other questions tagged passive-voice transitivity active-voice .