Is it right to say “a multi-vegetable salad”?

I want to state a salad that has many different kinds of vegetables, so can I say "a multi-vegetable salad"? I've looked up the meaning of the prefix "multi" in Oxford learner's dictionary http://www.oxfordlearnersdictionaries.com/definition/english/salad and found some examples such as "multicoloured", "multi-ethnic society", "multimillionaire",... It says that "multi" can combine with nouns and adjectives but "multi-vegetable" still somehow seems funny to me. So is it right? If not, what is an appropriate word to describe this kind of salad?

native English speakers tend to use the phrase "mixed salad".

I realise the logic of your thinking but the phrase "multi-vegetable salad" would not be used.

I think your hunch is right; multi-vegetable salad sounds a bit odd.

This might be why: the phrase sounds redundant because a salad has multiple vegetables almost by definition:

salad (n.) a dish, usually cold, of raw or sometimes cooked vegetables or fruits in various combinations, served with a dressing, or molded in gelatin, and sometimes with seafood, poultry, eggs, etc. added (from Collins; emphasis added)

salad (n.) a food containing a mixture of raw vegetables such as lettuce, tomatoes, and cucumbers, usually served with a salad dressing (from Macmillan; emphasis added)

salad (n.) a mixture of uncooked vegetables, usually including lettuce, eaten either as a separate dish or with other food (from Cambridge; emphasis added)

salad (n.) A food made primarily of a mixture of raw or cold ingredients, typically vegetables, usually served with a dressing such as vinegar or mayonnaise. (from Wiktionary; emphasis added)

salad (n.) food mixtures either arranged on a plate or tossed and served with a moist dressing; usually consisting of or including greens (from the Mnemonic Dictionary; emphasis added)

If not, what is an appropriate word to describe this kind of salad?

I think the word is salad. I checked the menus of a few restaurant chains here in the U.S., and when they want to give more details about a salad, they simply list the main ingredients: 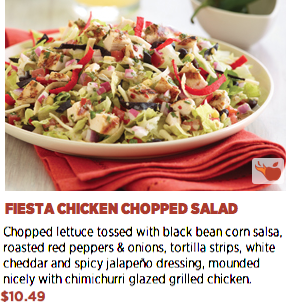 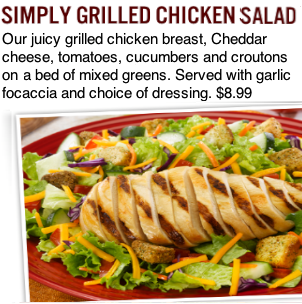 Sometimes you'll see the phrase mixed greens (as in the description on the right); however, that refers to a blend of lettuces – possibly with other leafy greens.

If you want to emphasize that a salad has only vegetables (no egg or meat), you could use the descriptor vegetarian salad.

The thing to understand about "Multi" is that it wasn't a commonly used affix until somewhat recently, (as Google shows here), long after the word salad came into usage.

As a result of "Multis" fairly recent rise in usage, there are a lot of terms that came about after the 1940s that use "multi" to show when we have several different objects creating one master object. For example a "multi-engine airplane" Is a plane who's power unit has more than one engine and, as you are probably aware, aviation terms were coming into usage vaguely at the same time "multi" was, hence people were aware of "multi" and could use it to clarify things.

The world "salad" on the other hand is a very old world (evidence from Google again). It started seeing a lot of usage in the last 1800s. Thus. because "salad" was a well established word that meant, more or less, "to mix a bunch of vegetables together for eating" there was really no need to add "multi-vegetable" in order to clarify the term. And people don't generally start adding an affix unless it's really needed to clarify an old term. Salad didn't have that need, so multi was never attached to it.

Sorry, probably a little off topic. But I thought explaining the etymology a bit would clarify why we don't use "multi" with a lot of words that could probably use it, but those words appeared before the 1930s so...we don't. Language is an organic thing, remember, it's not decided by a committee. Otherwise we probably would have all been forced to switch to "multi-vegatable salad" back in the 60s (rather than the 30 because, you know, committees take forever.... ;).)

It looks like the links I provided are causing some fits, so let me just include both graphs right here for easy reference :).

First, the graph for multi: Note the usage spike that starts around the 40s.

Now, the graph for salad: Note a gentle introduction starting in the 1810s that hits critical mass in 1890/1900 or there abouts.

Note: These graphs are provided by Google and, as I recall, are based off of searchable text at the Google Books site. This makes the stat man in me a bit squeamish, but I think the sample size is large enough to work for this discussion.

Not the answer you're looking for? Browse other questions tagged word-usage prefixes or ask your own question.

0
How to say it right: “none” or “noone”
10
Say “Her face is triangle” is wrong or right?
1
Is it right to say 'You are friends'?
0
“Multi-tasked woman” vs “Multitasking woman”
1
usage of prefix multi
3
Why is it right to say “cackle of laughter”
10
What's the difference between “veggie” and “vegetable”?
0
Is salad dressing fast food?
0
How to say that something is intuitively right?
0
Is it right to say “to correct” exercises?