I was reading a book and encountered this sentence (emphasis added by me):

Despite being grammatically correct, it seemed a little strange to me. What came to my mind was this sentence instead:

The OP clarified that he/she wanted to know the semantic difference between these two phrases. I will maintain that, for the general reader, both sentences are generally considered acceptable, and the semantics are identical for practically all purposes. There are some subtle variations in style or meaning in which one form might be better than another.

My position is supported by an absolutely outstanding work, with an unassuming name, General properties of Gerunds, Participles and Verbal Nouns (PDF). Based on this work, the phrase "his telling me" seems to be more traditionally (perhaps prescriptively) correct. Also, "him telling me" has more of a feel of an independent clause (aka IP), "subject verb object", while "his telling me" is more like a dependent clause (aka DP). The author also indicates there is ambiguity in how to parse these. Don't hesitate to search the General properties of Gerunds, Participles and Verbal Nouns for semantics to find additional relevant information.

I want to highlight this work (and the author) and encourage an interested linguistics reader to investigate further. It's a very interesting (advanced yet sometimes very readable) exposition on many facets of this complex issue, including this exact issue of semantics. The above chapter seems to contain (directly or indirectly via reference) the best research on the theory to this question through the publication date.

For reference, the above text is part of a book (also with an unassuming name), Complementation in English: A Minimalist Approach (Cornilescu 2003, Google Ref) I must say Alexandra Cornilescu has many outstanding and intriguing papers/books that I'll be reading. Here's the Wikipedia Page (translated) about him.
General searches to find these works, see:

I haven't the time to dig further into this at this point. Anyone else is free to use the source I've provided to create/enhance their own answer.

The following is my entire answer before the above note was created, and I still stand by it's value.

For the grammar involved, this question has a very good answer in https://english.stackexchange.com/a/2628/61171 (Credit @CopperKettle for reference.) I'll attempt to convey my native AmEng intuition with examples so we can avoid some of the heavier grammar lingo.

Second, let's simplify by giving him a name, "John". Now we can talk about John directly. This is simply a teaching aid.

In isolation, there's no significant semantic difference between the two sentences. They are saying exactly the same thing in slightly different ways.

But in some contexts, the differences could have some differing semantic pull. The issue of semantic differences might be rephrased: If you polled 100 people, what meanings would be interpreted, and what would be the percentage of each meaning?

Now consider some gerunds in which their function is more clear than the OP's sentences:

Note in the last example, "His dancing" is the subject of the sentence and functions like a noun.

For the first sentence, his is a possessive pronoun, and "his telling me" functions as a noun. The following sentences all have a similar feel to them (relative to the "him" sentence):

Here's a tree showing a traditional grammar layout of the sentence:1 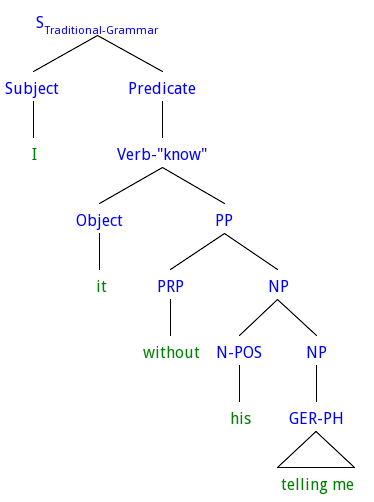 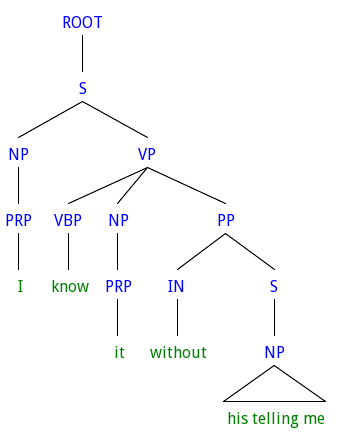 In the second sentence, the word "him" is the same as "John". Note the following:

"John dancing" has an active meaning. John is hypothetically doing something. Here's a modern syntax tree:3 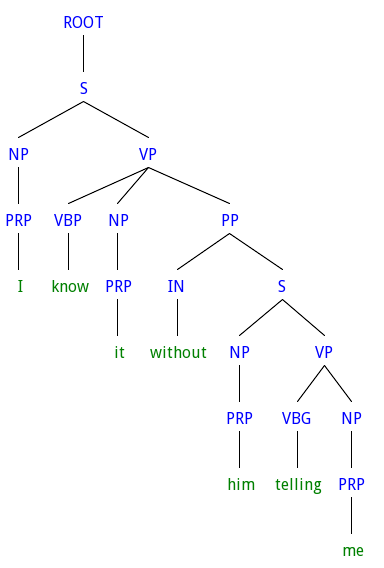 This section demonstrates how to easily create the images contained within this answer. As such, this section is only ancillary technical information and is separate from the answer proper.

Below, I show how to generate Labeled Bracket Notation and how to render that notation into an image of a tree.

For the modern grammar syntax trees, I went to the the Stanford Parser and entered the first sentence. I substituted [ for ( and ] for ) and plugged that into http://yohasebe.com/rsyntaxtree. That gave a pretty picture. I usually resize these in something like pixlr to make them smaller. These trees use artificial intelligence natural language processing (NLP), and as such, may give less-than-ideal or incorrect results.

The first sentence I changed to typify a traditional grammar.

The Stanford Parser results for the modern syntax tree didn't express what I wanted, so I modified it slightly.

For the second sentence, I liked the Stanford Parser result. It's still slightly simplified.

Let me provide some info as related to your question about versions #1 and #2.

Pronouns in this position normally appear in accusative case:

Note that this is one place where a gerund-participial in complement function cannot take a genitive subject, but unlike the construction dealt with in (b) above the accusative is not here an informal alternant to a nominative. (fn 61)

footnote 61: Nominatives are occasionally attested (e.g. * If I kept it secret, I could not use it without he in time asking awkward questions as to where I had obtained all the money), but they are rare enough to be set aside as errors.

Note that CGEL is the 2002 reference grammar by Huddleston and Pullum et al., The Cambridge Grammar of the English Language.

Not the answer you're looking for? Browse other questions tagged pronouns gerunds present-participles .

3
Do we use "my" or possessive pronouns in such sentences?
1
"Do you mind me asking" vs. "Do you mind my asking"?

2
he and his wife OR him and his wife?
5
"Nobody but he/him was present"?
2
Pronoun use with preposition: "with *he* and his wife" or "with *him* and his wife"?
2
"I'm not surprised at him/his having difficulties with the exam"
7
Is 'his not having a name' grammatical correct?
0
"My", "him" etc. as subject
1
His doing or him doing