What is the meaning of “You no understand”?

I was talking with some native English speaker. She said something and I replied:

What does that line mean? I'm not sure whether there was a question mark at the end or not. I guess it means:

I don't think she knew that I am non-native English speaker. There were a lot of people chatting and I threw my first message, "I don't understand" and then she replied, "You no understand". Perhaps there was something on that website via which she could know that I was chatting from a non-English country. I don't think she was trying to mock me. There must have been some other reason.

"You no understand?" is not something a native English speaker would ever normally say.

The only situation where a native speaker would say this, would be when speaking to a non-native speaker. I can think of three reasons there:

2) She was mocking you. I actually find this unlikely. Plausible, but it's just... a weird way to mock someone. Parroting someone in a mocking way is common, but this is a bit too different for straight parroting.

3) She was switching to a kind of "Pidgin English" - trying to use a minimal subset of English that will hopefully make the core meaning obvious even to those with most basic English. I like this idea. I have done it myself, on occasion. But there's the fact that you've coped perfectly well with inflecting and contracting "don't" in your very previous message! Why would she not use the word you used, if she was trying to make herself understood to you? Perhaps if she was expecting you to be using an online translator...

I think this is the most likely - she was referencing the meme, assuming that you'd understand. Like in-jokes, internet memes are something people share with a grin, to be friendly. So, she was being friendly.

5) She's a troll, her pic is fake, she's actually some guy in his mom's basement, and she just speaks in meme speak because that's how trolls speak.

6) A bot using simple but inaccurate grammar rules to respond to things said in the chat.

It is not proper grammar, but sometimes

In parts of the US where Spanish is also commonly spoken (and taught in school), you will also hear:

Of course, the possiblity that the speaker is just using poor English grammar due to skill level is also there.

Many years ago there was a comedian on British television by the name of Benny Hill. His shows were popular in other countries too.

Like many catchphrases, this one is still sometimes used by people who remember the programmes. It may mean nothing to younger people who don't remember the original programme and isn't necessarily funny if you don't get the reference.

In my opinion you take every small detail too seriously. Chatting is the wrong place to learn correct English because internet language is totally different and people tend to skip some words. You no understand is also famous from this internet meme: 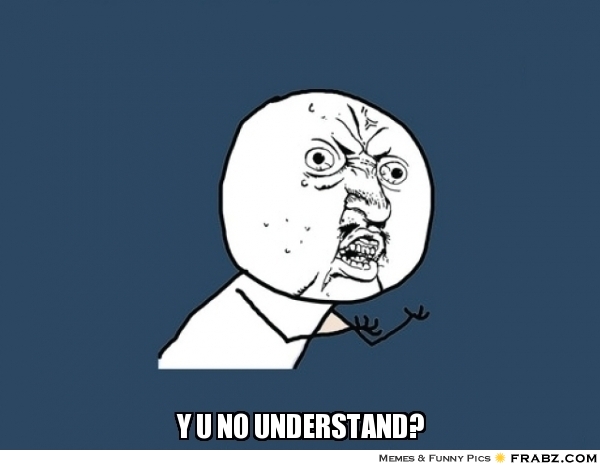 Here's my own explanation of why she wrote incorrect English.

Its the way new english speakers express them selves , and its usually an exact word to word translation to what the phrase really is in their mother tongue language , an example is :- in slang/informal arabic the verb drink is used for normal drinking and smoking as well , therefore you might find arabs say "I drink cigarets" rather than saying that he "smokes" .

The answer to your question is , "Don't you understand?"

Perhaps she tried to be "funny". This is what comes to my mind when I hear that phrase, I heard that joke maaaany years ago: http://www.skronn.de/italien/detroit.htm

I think it's translated directly from Chinese. In Chinese it's "你不懂","你" is you,"不" is no, "懂" is understand.

Not the answer you're looking for? Browse other questions tagged phrase-meaning sentence-meaning meaning or ask your own question.