I checked many dictionaries and the examples of poor in the context of sympathy state 'thing', 'you' or a direct name (proper noun). I wonder what is the correct form of the pronoun there?

Ngram shows both in practice!

I've always heard this as "Poor him", never "Poor he".

Note this is not a complete sentence, so it's difficult to say what grammar rules apply. There is no verb. I suppose the grammatically correct way to say it would be, "He is poor". Though in this case, that would change the meaning, as "He is poor" would be understood to mean that he is lacking in money, while "Poor him" means that he is a victim of some bad circumstance, possibly involving money but usually not. We typically say things like, "Bob's dog died yesterday. Poor him." Of course losing his dog probably doesn't not hurt him financially, but rather emotionally.

Usually in this sort of construct we use a noun rather than a pronoun. We'll say, "Bob's dog died yesterday. Poor Bob.", rather than "Poor him." But it's not unheard of with the pronoun.

Many other adjectives can be used in the adjective-noun form. "Good dog." "Foolish boy." "Lazy fellow." Etc. I guess any of these could be used with a pronoun, when the person or thing meant by the pronoun is clear from the preceding context.

In the first sentence, we see a clause with --ing. It isn't past tense or present tense. Because the clause has no tense, we don't use she. But in the second sentence, she is the subject of liked. The word liked is past tense. We need she not her.

However, the utterance Poor she is ungrammatical - in normal, standard English. This is because we need a tensed verb for she. In this utterance, there is no verb. So there is no tensed verb either!

If you look at Ngrams, you will think that there are some sentences with poor she. But this is not true. Ngrams do not show which exact sentences these words are in. Here is a list of examples from books from Ngrams. It is the actual list of examples of the words poor and she in published books. If you look at the examples you will see that poor and she are not in the same clauses. Sometimes, they are not in the same sentences. Here are some of the examples:

In the first two examples, the words she and poor are in different sentences. In the third example, poor is in the clause:

But the word she is the subject of a different clause. This clause is:

This shows that the words poor and she don't have a grammatical relationship in the sentence. Usually, we can only use she for the subject of a present tense or past tense verb. When there is no verb, or the verb has no tense, we need to use the word her!

There is no verb in the sentence:

Because we usually only use she with tensed verbs, poor she is ungrammatical in modern, standard English. Instead we need:

[There is another interesting problem which is not part of the Original Poster's question. Some pronouns which do seem to be the subject of tensed verbs are still accusative. In other words they take her and not she. The answers in the linked-to post are very interesting. But this is really a different problem altogether. The situation with our question here follows the normal pattern of the grammar]

Yes, the Ngram shows both – but did you take a closer look? 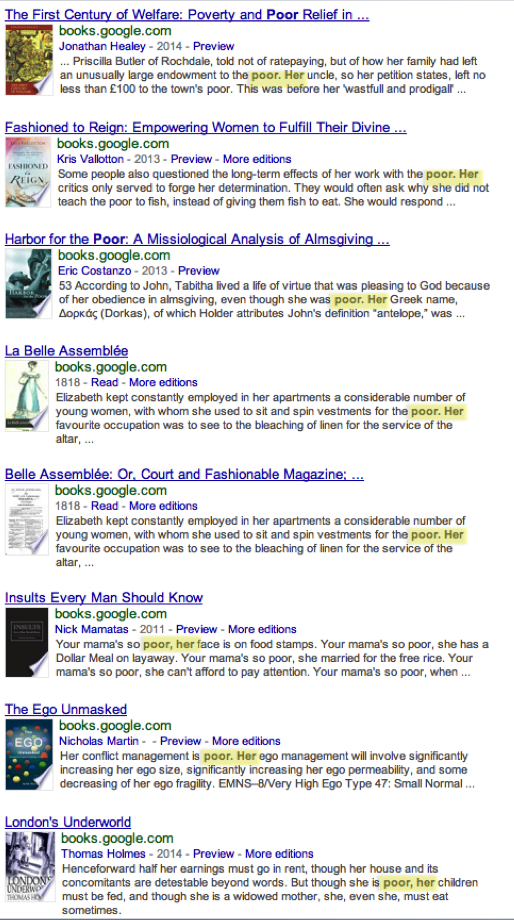 Many of those "poor her" quotes are false hits; they are found in passages such as:

Mother Teresa helped the poor. Her compassion is well-known and admired.

When used as a two-word expression, I rarely hear a third-person pronoun used. Instead, it's often the name of person:

Poor Maulik! He's confused about English again. What a vexing language it is.

Then there is this classic line:

The worms were eating in Ernest. Poor Ernest.

which is a humorous pun using the name Ernest and homophonous adjective earnest.

Pronouns don't normally allow an adjective before it.

You are interesting, and you allowed me to contact you for this academic project.

This is fine, but if we want to place the adjective before the pronoun, it will be incorrect, and hence the following sentence is not correct -

But there are few adjectives that are exception to this rule. (e.g. poor, silly, lucky etc.). These adjectives are semantically non-restrictive.

After such adjectives the nominal form of pronoun is correct. Using subjective form with those adjective will be incorrect.

So the main thing here is to identify which adjectives functions like this way. We have already found a few. Now the question is if any other adjectives can be used this way? If yes, how to identify them? These are the main questions that my answer doesn't include, because I myself don't know :( If anyone knows, I request him/her to please share this info.

@CoolHandLouis in the comments provided a link to a great detailed answer to this on english.stackexchange.com.

The reason why this is happening is detailed here:

So what happens is that you are taking ADJECTIVE PRONOUN, which takes the objective case, and then turning around and using that as a third-person subject, even when it is a first- or a second-person thing. This distances the speaker a bit from what they are saying, as though it were someone else they were talking about. It is hard to see how else one would phrase such a thing. Consider: ...

It does "break the rules" so be careful when using this, if you stray from well-known adjectives, it could confuse a listener/reader.

Not the answer you're looking for? Browse other questions tagged pronouns or ask your own question.

6
Adjective + Pronoun - what kind of sentence structure is that?

5
“Andrew looked at him in the mirror”: can “him” refer to Andrew?
0
The reason to use the pronoun 'they'
0
Distinction between singular “like” and plural “likes”
8
“Both you and he are very happy” or “Both you and him are very happy”？
3
Possessive pronouns as a general term
18
Can adjectives modify a pronoun like “rich they”, “poor you” and “beautiful I”?
0
Can we use an infinitive clause with no object in order to specify a purpose?
0
What do you think “they” refers to here?