do you release the air from nose when say cotton?

I am trying to learn how to pronounce words like cotton, written, mountain. in general, the t, then n (between them will not be pronounced)

With your nostrils clamped tightly shut with your fingers, it is impossible to sound the second syllable of "cotton" and "written": you will feel the pressure in your ears if you try. So yes, there is air coming out through the nose on the second syllable.

Even if the word is pronounced rɪtn the nasal -n- still requires ventilation through the nose.

[p b t d k g] are oral stops (or plosives), meaning the air is blocked at a particular place of articulation, accompanied by sudden release of the air through the mouth.

[m n ŋ] are, by contrast, nasal stops i.e. a closure is made in the oral cavity at a particular place of articulation to stop the air from escaping through the mouth, the soft palate (velum) is lowered, and the air is released outwards through the nose.

Oral stop followed by a nasal

Words like cotton, button, hidden, sudden, kitten etc., can be pronounced in two ways, depending on the speaker. One way is to pronounce an intervening schwa [ə] between the [d, t] and the nasal [n, m]:

Another way is to release the oral stop ([t d p]) nasally—through the nose. Both of them are correct and common. You can pronounce it either way.

A type of release of a stop in which the oral closure is maintained but the soft palate is lowered, allowing air to escape through the nose.

This is particularly found in words in which the oral stops are followed by a nasal (preferably a syllabic nasal). In words like kitten, hidden, button, cotton, sudden, bottom etc., the oral stops are followed by syllabic nasals. The oral stop is normally released orally (through the mouth), but when it comes right before a nasal, it's usually released nasally—through the nose—by lowering the soft palate.

Nasal release can also be found in words where one syllable ends in an oral stop and the next syllable starts with a nasal as in to[p.m]ost, su[b.m]erge, ca[t.n]ip, ma[d.n]ess etc.

It's particularly noticeable when both the oral stop and the nasal are homorganic (share the same place of articulation), for example:

In case of cotton, button, sudden, hidden, both the oral stop ([t] or [d]) and the nasal ([n]) are homorganic (all of them are alveolar), so the tongue comes up and contacts the alveolar ridge for the [t] or [d] and stays there, then soft palate is lowered and the air is released through the nose, that's the syllabic [n]: [ˈbʌtn̩]

For most people, however, there's a vowel between the oral stop and the nasal, so they move down their tongue after the oral stop, in which case, the nasal isn't syllabic: [ˈbʌtən] (it's perfectly fine)

Syllabic consonants are represented in IPA by a small vertical line below th consonant:

Here's an illustration of Nasal release (nasal plosion) from A Course in Phonetics by Ladefoged and Keith Johnson: 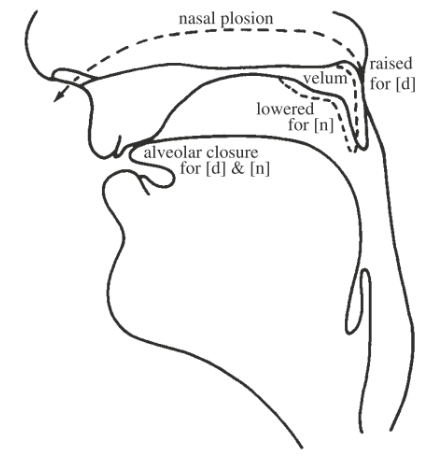 Not the answer you're looking for? Browse other questions tagged american-english pronunciation phonetics american-accent consonants or ask your own question.

1
Is ”Physical”'s IPA spelling not unique?

3
Pronunciation of “a” in “cat”
5
What are the differences between /ɑ/ and /ɔ/ in American English?
3
Is 'ex' of 'extinct' pronounced differently from that of 'exactly'?
3
Do native English speakers always pronounce `th` correctly?
5
“What you”, “that you”, “without you” pronunciations using a “ch” between the words
3
How to pronounce unaspirated stop sound properly? Such as the /t/ in “ let me”, is it just/lɛ/ /mi/?
1
Do I have to pronounce the letter “l” as light or dark when there is a double “l” followed by a vowel in a word?
0
How is Lenny Kravitz pronuncing this sentence?
0
Linking pronunciation: ‘linked to’