I think the word pudding is used mostly as a general name for sweet dishes in the UK, whilst in the US it is a specific dessert. What do the British people call it? It looks delicious innit? 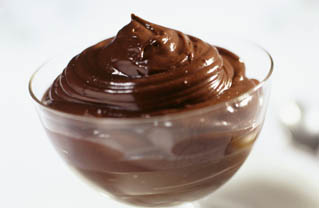 Speaking for the UK, if we served a dessert looking like that, it would probably be a chocolate mousse (although this seems to have been piped into the dish, which isn't what you'd normally do with mousse).

However, I don't know enough about US pudding to know whether that dessert pictured actually is something we'd call a chocolate mousse, or just looks like it. A quick search for a US recipe for chocolate pudding yields something that probably isn't a mousse since it doesn't seem to have much air whipped into it. Maybe it does from the boiling milk, but a typical UK home-made mousse you'd whip egg-whites then fold them into your chocolate (whereas chocolate mousse bought in a pot from a shop almost always has gelatine, I assume because it has to stay fluffy a lot longer).

There is such a thing as custard, and it can be (rarely) flavoured with chocolate, but if your pudding doesn't have eggs in it then it pretty much isn't custard. Anyway "chocolate custard" certainly isn't a common dessert here.

Based on the recipe I found, we might call it "chocolate sauce" and wonder why it's being served on its own! So I suspect the problem is you're asking for the UK name for something that isn't typically served here, and doesn't really have a UK name.

I'm a Brit that's spent a number of years in the US.

There's no direct analogue. But, if you want to describe it, remember, context is everything. Just as dessert is the name of the 'sweet course of a meal' in the US, you can get things with the name dessert in them and not be confused. Likewise with pudding.

Plus, in British English pudding isn't even a generic name for 'sweet things' in all contexts (because you'll be really surprised when you take a bite of steak+kidney pudding) but is actually a reference to a shape, specifically the 'pudding bowl' (and hence leading to the name 'pudding bowl haircut')

Just call it what it is, 'chocolate pudding'. Anyone who knows what it is, will know, and anyone who doesn't, won't— whatever the name.

In Commonwealth countries these [North American] puddings are called custards (or curds) if they are egg-thickened, blancmange if starch-thickened, and jelly if gelatin based. Pudding may also refer to other dishes such as bread and rice pudding, although typically these names derive from the origin as British dishes.

Gelatin pudding is very common in the US. Anything you buy at a grocery store or make from a boxed mix will most likely be gelatin. Egg-thickened custards are higher-quality but more difficult to make.

If it's a pudding made from milk, corn starch and flavourings mixed together and whisked, then the British equivalent is Angel Delight. (This is a brand name, but it's synonymous with the dessert in the same way as Hoover is with vacuum cleaners.)

If the same ingredients are cooked and then cooled, then it's flavoured custard. Egg-free custard made from corn starch, milk and flavourings is very popular in the UK. Individual pots of chocolate custard do exist, although they're not as popular as American pudding seems to be. Ambrosia is a popular brand.

I think is it 'vla' (http://en.wikipedia.org/wiki/Vla) although probable no one will use that word ;)

A chocolate mousse is a hybrid of a pudding & a flavored whipped cream served on it's own rather than as a topping.

Pudding in the US is milk mixed with cornstarch, gelatin, sugar, & flavoring, & often requires no cooking.

Custard is the most like pudding in consistency, but made with eggs.

Blancmange & Flan/Pudim are technically Jellos/Gelatins made with milk & eggs. They're too stiff & jiggly to be puddings.

In Britain American "pudding" would be called "flavoured custard".

"Custard" in Britain would be Bird's custard powder which is vanilla flavoured corn starch.

I would say a flavored custard is the best way to describe American style pudding, when making from scratch, you typically follow the same directions as a custard, and while store bought premade packs exist and have gelatin and cornstarch in it, they are really just acting as replacement ingredients for the eggs and to save money

Not the answer you're looking for? Browse other questions tagged word-request british-english or ask your own question.