Is it necessary to use commas in lists before the conjunction?

"She was happy, and cheerful"

Do we have to use a comma before "and", or is it incorrect? If it is not, then why?

For two items, the use of a comma between elements of a list is forbidden

For lists of three or more items, the choice of whether a comma before the final and (called the Oxford comma, Serial comma or Harvard comma) is contentious. Some people believe it should be mandatory - others forbid its use.

In my experience, Americans and Canadians tend to err on the side of requiring its use; British and Australian English tends to err on not using it.

Some people argue that the use (or omission) of the serial comma can cause ambiguities. Both are right, as shown below:

Ambiguities arising from omission of the serial comma

This book is dedicated to my parents, The Queen and God.

This sentence is ambiguous between:

Ambiguities arising from use of the serial comma

This book is dedicated to my mother, The Queen, and God

This sentence is ambiguous between

From the Wikipedia article:

The Chicago Manual of Style, Strunk and White's Elements of Style, the United States Government Printing Office, most authorities on American English and Canadian English, and some authorities on British English (for example, Oxford University Press and Fowler's Modern English Usage) recommend or require the use of the serial comma.

Newspaper style guides (such as those published by The New York Times, The Los Angeles Times, the Associated Press, The Times newspaper in the United Kingdom, and the Canadian Press) recommend against it.

The differences of opinion on the use of the serial comma are well characterized by Lynne Truss in her popularized style guide Eats, Shoots & Leaves:

There are people who embrace the Oxford comma, and people who don't, and I'll just say this: never get between these people when drink has been taken.

As an ESL, I understood the Oxford/Serial/Harvard comma with this example: 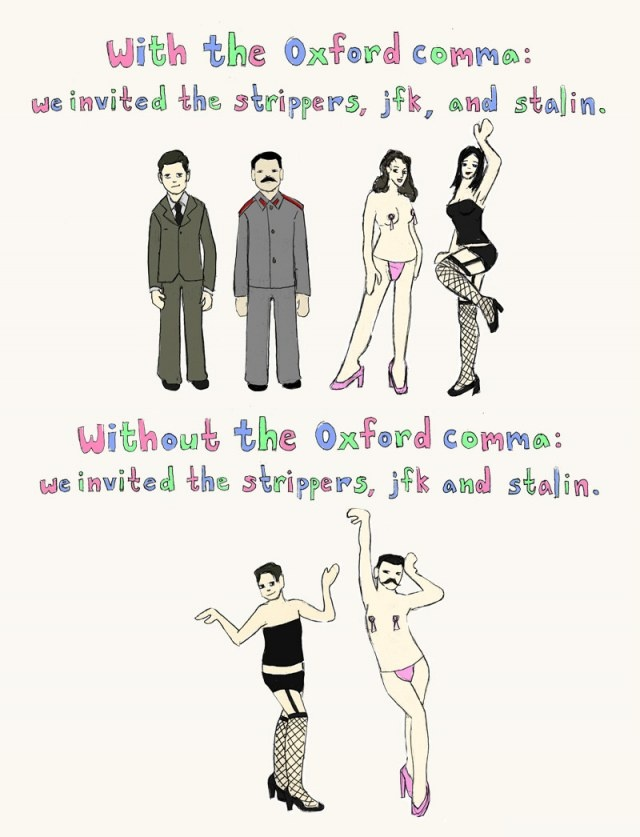 Since then I've been careful.

Put a comma before and if it’s needed for clarity. If it isn’t, don’t.

When to Use a Comma before "And"

Two specific situations call for the use of a comma before "and." The first is created when we have three or more items in a series. This mark of punctuation is called the serial comma.

The second situation occurs when "and" is being used to coordinate two independent clauses. An independent clause—also known as a main clause—is a group of words that has a subject and a verb and can stand alone as a sentence.

The use of the comma would also apply when any of the seven coordinating conjunctions (and, but, or, nor, for, so, yet) join two independent clauses.

In your provided phrases, you don't need to use , and anywhere.

Not the answer you're looking for? Browse other questions tagged conjunctions commas lists .

6
Use of commas before "that"
1
Putting commas before be-verbs that introduce clauses
9
Can I place a comma after a conjunction beginning the sentence?
0
Why are there no commas before some prepositional phrases and not others?
1
The use of a comma before "rather than"
0
These commas are necessary?
0
Comma before correlative conjunction not only ... but also
2
How to use commas and “and” in a list of three items where the first two items are followed by a parenthetical remark “(both…)”?
0
Should I use a comma before and (Comma Before And in Lists) in the following sentences?