Noun to describe a 'radial shape'?

I want to use this in the following sentence:

The shape the blocks make together when seen from above resembles a radial.

Radial adjective: a radial pattern or design consists of straight lines that all go out from the center of a circle

The phrase like spokes on a wheel is often used to describe this configuration.

You can look through several published instances of this phrase at this Google books search. Sometimes the expression is used to describe an architectural concept (also called hub and spokes, as in the image shown below on the left); other times, it's used to describe the physical appearance of something (as in the image on the right, which was taken from a 1948 Popular Mechanics magazine, where it was described as in the article as “radiating outward like spokes on a wheel”). 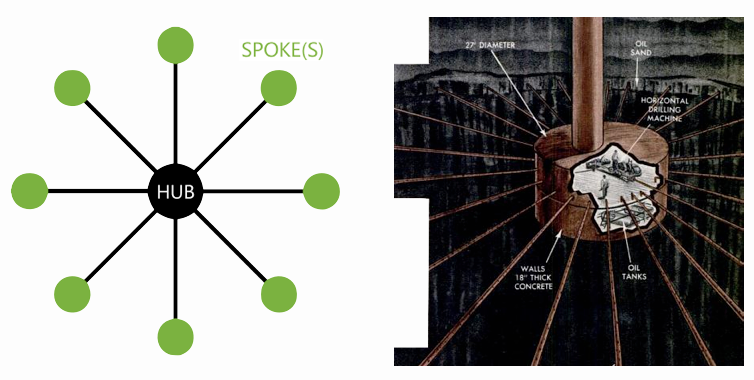 The expression can be found even in culinary circles:

I would rather rewrite the sentence as follows:

Seen from above, the blocks together have a radial shape.

Radial is already used as noun, but it has a different meaning.

3
Is it idiomatically correct to say “Her voice sounded lewd”?
2
How to describe the following scenario in English without referring to any figure?
1
“out of” vs. duplicated “from”
1
Usage of “that” in this sentence
2
Use of “whether” without “or not”
0
The differences between “dainty, small and delicate”
0
To turn (around/round) the corner
0
Make complaint+ with