You prefer to “eat soup” or “drink soup”?

Background: We have a local food that's something between "broth" and "noodles". Unfortunately, English language experts in Iran don't bother to introduce a suitable word that deals with the problem. But that isn't the problem. To know how I'll be able to use a suitable word (if any), I first need to make sure of the following:

Problem: As well phrased by the title, is there a regulation or a norm which disallows us from "drinking/eating soup"?
Or is this totally context-based (as abiding the rule that if we refer to the liquid, it must be "drinking" and if we refer to the solid ingredients, it's "eating"?)
There's also a third possibility in which natives take the "viscosity" or the solid nature of food into consideration and decide which verb to use, but I have got no clues.

FYI, This is the local food that has given rise to this question: 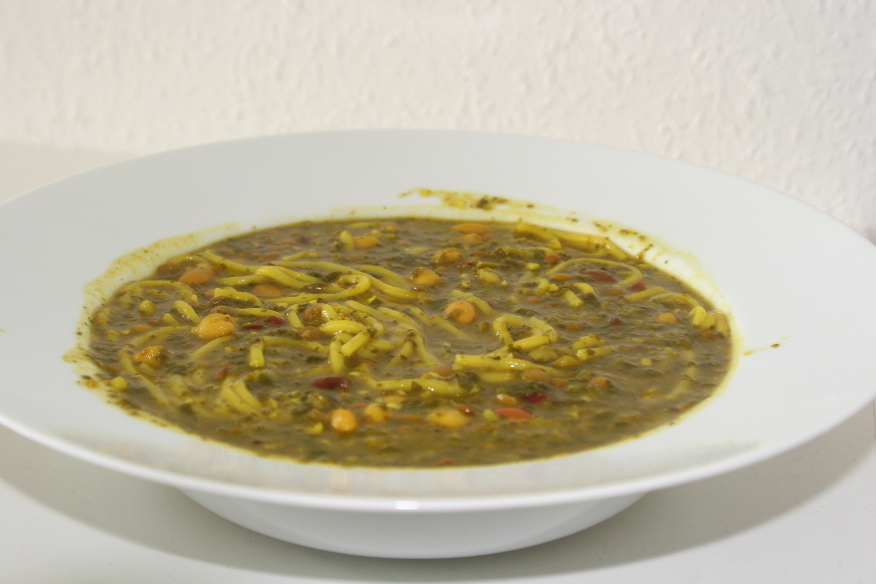 The rule of thumb that I would recommend is, if you consume it by:

Normally, soup would fall into the first category (using a spoon), so I would tend to say "eat your soup". (However, when you pick up the bowl and pour the last ounce or two of liquid straight into your mouth, I would tend to say that you are "drinking the last drops from the bowl".

The actual difference between eating something and drinking something is that when you eat, you get some quantity of the item in your mouth, you (optionally, but recommended!) chew it, and then you swallow once. When you drink, you have a continuous supply of the item entering your mouth, and you swallow at least once (but usually more), without ever chewing. So it is entirely possible, as you note, to choose between eating your broth and drinking it.

The upshot is, if you are serving this local food with a spoon, you can safely refer to eating it.

It's also worth noting that you can avoid the entire eat/drink issue by using the generic word have, in its sense of "partake / consume":

Have a bowl of soup for lunch!

I had fried chicken for dinner last night.

Personally, I (native AmE speaker) prefer "eat soup" over "drink soup" regardless of the composition of the soup: I would consider it food (and not a beverage), and I would think of it as predominately something to alleviate hunger, not thirst (although obviously it could do both). If the soup is not entirely liquid this preference is stronger. Likewise, if the soup is eaten with spoon, as opposed to directly from (say) a mug, my preference for "eat" is stronger.

For context, I would have much less of a preference for which verb to use with broth: my verb choice would probably depend upon how the broth was consumed. This is probably because I think broth is closer to the line between food and beverage. On the other hand, I would probably always say "drink a smoothie", even though it might have more food value, simply because I think of it more as a beverage.

The OED has these relevant definitions of "drink": "To take (liquid) into the stomach", "To swallow down the contents of (a cup or vessel)", "To swallow down (something solid) in a liquid", To swallow down or imbibe water or other liquid, for nourishment or quenching of thirst". These seem to leave the question of soup open; the "swallow something solid" definition seems to be referring more to incidental solids (such as a bug in one's drink). I do notice that none of the quotes under drink refer to soup.

Under "eat": "To take into the mouth piecemeal, and masticate and swallow as food; to consume as food. Usually of solids only." and "Of liquid or semifluid food. Now chiefly with reference to soup, or other similar food for which a spoon is used." This seems to support the idea of the utensil distinction.

Summary: I personally lean toward "eat soup" in all circumstances, but would not react negatively to others' use of "drink soup". I would strongly suggesting using "eat" if A) the food is largely solid, regardless of what it is called, B) it is consumed with a utensil (either generally, or in the particular case being discussed) and C) it is considered "food" (as opposed to "beverage").

You could use either. "To eat" and "to drink" both mean to put something in your mouth and swallow it. Generally, "drink" works for beverages, which are lifted in a glass and poured into the mouth, while "eat" implies something eaten with a spoon or fork or similar and requires chewing. However, there are many exceptions, and if you are discussing a food that is not native to an English-speaking nation, you get to decide what verb to use.

I'll give you some examples to think about.

Milkshakes are drinks, even though some are thick enough that they won't pour out of a glass, and may be consumed with the help of a spoon.

However, there is a fast-food chain called Dairy-Queen in the USA that sells a thing called a Blizzard, which is essentially a very thick milkshake. Their marketing material emphasizes how they are so thick they won't pour out of the container even when upside-down. These are "foods" that are "eaten" with a spoon, even though they are served in a cup.

Ice cream is also a food, even though a soft ice cream doesn't require chewing.

Tea is universally considered a "drink". It's thin like water and served in a cup. Chicken soup is also thin, but it has bits of chicken or noodles in it which must be chewed, so it's a food that is eaten.

However, bubble tea is tea with tapioca pearls in it which require chewing, but it is still considered a drink.

So as you can see, there isn't necessarily a good rule. However, I'll offer a guideline: if you can imagine consuming it with nothing but a straw, it's a drink. Otherwise, it's a food.

You eat soup. Good to note what all Hellion said but here are my two cents!

Apart from the quantity in your mouth (as Hellion says), I think it also depends on the 'thickness' of the edible item you are having. Soup is generally thicker than water. Also, gravy, tomato sauce/ketchup, etc. are eaten as they are not completely in liquid state.

In my own house, when we used to feed my baby girl with milk, she'd drink milk but then, the same milk when mixed with a little protein powder, it'd turn a semi-solid food that she'd then eat.

Another word comes to my mind is the verb sup. However, the word is old-fashioned, it means drink something in small quantity. That said, you may also sup soup at supper.

Another theory that comes to my mind is unless it's clear soup, you generally have some pieces in soup and that could be the reason it's eating soup. However, it's just another theory, not a concrete one!

Lastly, I also liked the option of having soup clearing all ambiguity!

If there's noodles in it and it's served in a bowl with a spoon or other utensil, I'd definitely say eat over drink. If it were only broth (or at most with very small pieces of things not requiring a spoon), especially if served in a cup or mug, I would perhaps say something like 'drink broth'.

More likely than either of those, I'd say "have soup":

"Come have some soup!"

"That sounds good. Yes thanks, I'll have soup."

"What are you eating for lunch?"

0
Is it appropriate to use “drink” as verb for canned soup?

13
“Would prefer” versus “would like”
7
To eat at/in a restaurant
2
“Eat in one day” vs. “eat on one day”
1
Did you take your food / did you eat your food
4
Splash/Throw Drink At
1
Is it right to say “what do you prefer to go to work?”?
3
Can we invent English words based on similar usage? Ex, “can you eat a mouse” or “.. eat mouse”?
0
Do “I ate many noodles today” and “you should eat many vegetables” sound wrong?
0
Is it appropriate to use “drink” as verb for canned soup?