Stuck writing a sentence because tea is a 'beverage' and water is not!

I am writing an article on tea. I want to say that...

The problem is tea is a beverage but water is not. So, if I come up with this sentence, it's incorrect.

Tea is the most consumed beverage in the world after water -incorrect, because water is not a beverage.

Being a doctor, I think it's possible to have water be a beverage because when water is fortified with some other nutrients it turns into a beverage. Having said that, bottled water can be considered as a beverage but water itself is often not classified as a beverage.

Tea is the most consumed thing in the world after water -incorrect, because tea is not a thing.

Tea is the most consumed drink in the world after water -incorrect, because water is not a drink.

I'm skeptical about using drink as a noun here. I'm utterly fine with the verb drink, as you drink water.

I'm stuck on this, because they both are consumable liquids. But one is a beverage and I'm not very sure about the other. But in a common sentence, I want to include them both as 'the most consumed _______' in the world.

Well this is news to me that water ain't a beverage.

The Huffington Post seems to agree, if this 2013 headline is any indication:

Water is now most popular beverage in U.S., knocking soda off top spot

Or this: Drink Water Until It Becomes Your Beverage of Choice.

Not every dictionary and, believe me, not everyone speaking AmE is going to agree that water is not a beverage. (Edit: However, having thought about it, I think there is a specialized meaning of beverage that can exclude water; I'll post a separate answer for that).

And see Yahoo answers where almost every answer to the question Is water a beverage - my friend says no? avers that water is a beverage. Of course those are all junior high kids answering that question, but...

If you want to go with those who say it ain't, I reckon you could say drink. As far as I know water is a drink even though some folks don't classify it as a beverage.

Water is a drink. And regardless what that dictionary says, I would happily call water a beverage in the context of this sentence. So either of:

Tea is the most consumed beverage in the world after water

Tea is the most consumed drink in the world after water

is absolutely fine. But if you're unsure, go for the second one.

You've done a good job of finding a few sources which seem to exclude water from being classified as a beverage. However, for every one dictionary entry you can find that excludes water, I can probably find one that specifically includes water. Some seem to allow for some wiggle room, wisely using a word like usually or sometimes, while others make no mention of water at all. The definition seems to be fluid.

Ultimately, though, this really depends on context.

Say we work for an airline, and we are trying to figure out which beverages we need to stock on each flight. We serve drinks like orange juice, Coca-Cola, and bottled water: 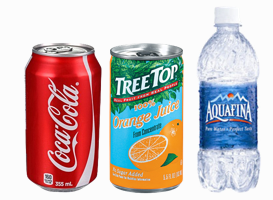 In this scenario, I would classify the water as a beverage, because, like the other beverages on the beverage cart, it's purchased by the airline in single-serving containers, and it's also dispensed from single-serving containers. It would be silly to exclude water from this beverage study – and even sillier to worry about the beverage study being mistitled because we happen to be including bottled water in the data.

However, let's say we were trying to figure out which beverages are consumed most at a particular airport. In that case, I would include ALL of the beverages sold at the newspaper stand – which we can see includes Perrier and some other bottled water:

but I would NOT include water taken from the water fountains, because the data would be too hard to collect. (Furthermore, it would be impossible to differentiate which water was dispensed for consumption, and which was being used for, say, brushing your teeth or rinsing out your mouth.)

In short, in these scenarios, I would classify bottled water as a beverage, but not tap water – even though it's obvious that both can be drunk for refreshment.

If I was doing a similar beverage study at a restaurant, would I count free water as a beverage? That depends on the purpose of my study: am I trying to calculate profit, or am I trying to figure out how many cups to buy? In the former case, I exclude water; in the latter, it gets included.

As for your sentence:

Tea is the most consumed beverage after water.

I think beverage works just fine there, and I can't think of any better word to use. If the muddiness of water-as-a-beverage bothers you, you could write it this way:

Excluding water, tea is the most consumed beverage.

As others have pointed out, some dictionaries say that "beverage" excludes water, others do not. Given that there is some ambiguity, if you simply said, "Tea is the most consumed beverage", a reader might fairly wonder, "Wait, don't people drink more water than tea? Or is he not counting water as a 'beverage'?" But if you say, "Tea is the most consumed beverage after water", then it is clear that you are including water as a beverage, so the ambiguity goes away.

Leaving aside the question of whether water is a beverage, and ignoring the very strange idea that water is not a drink, you nonetheless have an option open to you that accords with your definitions and is logically and gramatically correct:

Tea is the most consumed beverage, not counting water.

That sentence a) does not call water a beverage, b) does accurately place tea second in the list of most consumed potable fluids c) does not use convoluted terms like 'potable fluid'

If you went to a venue which had a sign on the door saying 'No food or beverages allowed', would you take in a bottle of water, or not? What if it said 'No food or drinks allowed'? I had never thought about this distinction, but I can see no reason to exclude water.

If you want to apply this logic, then you can simply state that

Tea is the most consumed beverage.

Given the pedantic nature of the question fluid or liquid would fit better but contextually they do not fit.

Regardless of dictionary definition beverage would fit the best for any native english speaker or reader.

As an alternative you could use Liquid Refreshment. Refreshment being a generalization of something that could be consumed by a human and refining that set to liquids. This raises another pedantic issue that tea may not always be a refreshment if it is only consumed for pleasure. But then the argument could be made that consuming anything refreshes you regardless if that was the intent.

You are being misled by both of the references you are listing - or rather, you're being far too pedantic in interpreting them.

While it is true that beverage tends to be used more often to describe drinks more interesting than water, water is not excluded from what can be a beverage. Many other dictionaries will agree.

Interestingly, googling "Beverage Definition" returns google's own definition: "a drink, especially one other than water." Which may be the source of your confusion, noting that Water is absent from the list of beverages on Wikipedia.

Beverage can, and often is, used to define a drink that is not water, simply because water is so ubiquitous that it's taken for granted. But water is a beverage, it is a drink, and the only reason it is sometimes excluded from those definitions is because it is already assumed to be both of those things.

The question of whether a liquid is a beverage would depend, to my ear, on whether the liquid is intended for oral consumption. Most potable liquids are produced primarily for the purpose of oral consumption, while most water is used for other purposes. Further, the result of adding concentrated substances to water will often be described in terms of the added substance (e.g. a mixture of concentrated orange juice and water will be described as reconstituted orange juice, rather than as water with concentrated orange juice added) but such description would be rare with other liquids.

Drink is just fine as a noun.

Beverage to my ear implies "something which is brewed" (beer, tea). This may be a British thing. So, to me the term does not cover water, soda, juice, squash, smoothies, etc.

[Edit: However, this interpretation of the word is unsupported by etymology or any dictionary or usage guide I can find. Beverage apparently implies "drink", nothing more. I have never heard it used in this way. But Googling, I can find many counter examples, particularly in menus with a section for "beverages".

In particular, the Beverage Standards Association of the UK specifically includes "Water" as a section on its website, along with "Smoothies, Freppes and Juice": http://www.beveragestandardsassociation.co.uk/ ]

Liquid works for me, and I don't understand the downvotes on that one. Lava and mercury are also liquids, yes, but there's nothing wrong with the term in the phrase "most commonly drunk liquid".

And finally, there's Potable, which can work as a noun as well as an adjective.

Tea is the most consumed fluid in the world after water.

Both of them are fluid and the term fluid can be used when it comes to drinking.

0
How is "made FROM virgin [any material]" possible? Shouldn't it be "made OF virgin"?

8
Why 'the' is required in these sentences?
1
Question about 'improving' and 'consuming'
5
comma / surprising / capitalization
2
What's the meaning of 'stick'?
4
What does "tea ring" mean in this sentence and why "ring"?
2
What does "in its absolute stakes" mean in this context?
8
Water / a beverage that contains small gas bubbles
3
What does "But my boots need other doctoring, for they not only admit water, but even peas and gravel-stones." mean?
0
When do we say "I stirred salt into water to make salty water" or "I stirred salt into water to make salt water"?